Tom & Jerry is a nice and sweet cartoon for kids and even we the adults love watching! In this list, we talk about 5 free Tom & Jerry Show apps for Windows 8 devices that allow you to watch the Tom & Jerry show episodes on your Windows 8 device absolutely free! These apps are pretty lightweight and contain high definition videos of the Tom & Jerry show episodes. The best part is that you can watch them at the convenience of your home, and all you need is an active internet connection! As these are Windows 8 apps, so naturally they are available from the Windows 8 App Store!

Let us read more about how these apps function on Windows 8 devices! 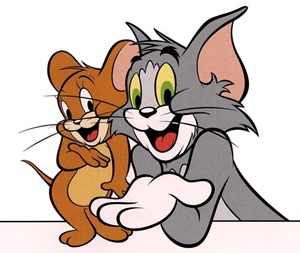 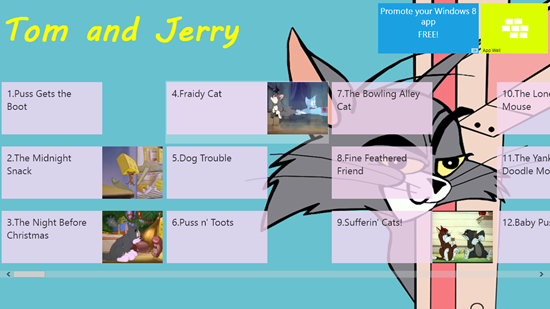 As the name of the app aptly suggests, Tom and Jerry Show allows you to watch Tom and Jerry episodes on your Windows 8 device. When you launch this app, you will be presented with a list of episodes in a tiled manner. Clicking on these tiles will open up the video in the next screen in a full screen view. The app has neat controls at the bottom of the screen that allow you to play, pause, fast forward etc. The app basically fetches the videos from popular video sharing websites, and this helps in keeping the size of the app to a minimum. The app also supports playback of videos in snapped mode, and this allows you to work on something else while watching Tom and Jerry!

Get Tom and Jerry Show. 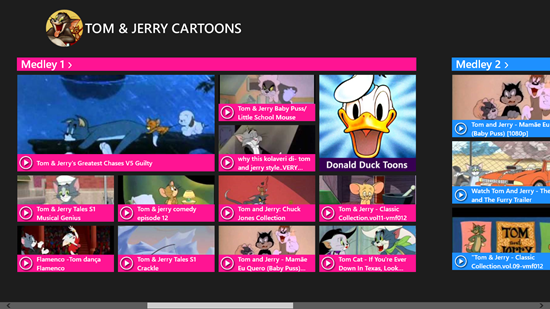 Tom and Jerry Cartoons is another free Windows 8 app that allows you to watch Tom and Jerry on your Windows 8 device. When you launch this app, you will be presented with a tiled interface of all episodes of Tom and Jerry. Clicking on any one of these episodes will begin the playback of the selected episode. The best part of this app is that when you click on an episode, it actually begins the playback of a playlist of episodes for Tom and Jerry. You can then click on the next episode in the list from the right side if you want to change the episode. There is another benefit of the playlist feature, i.e., when your episode ends, the playback of the next episode starts automatically. Overall, this is a nicely developed app that surely deserves a look!

Get Tom and Jerry Cartoons. 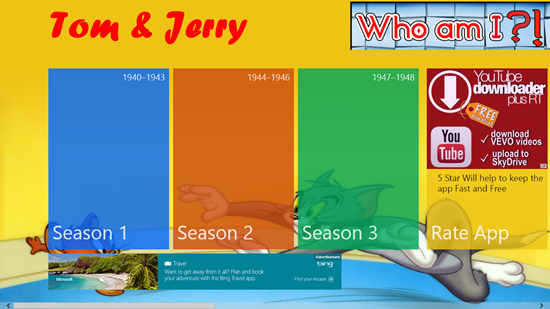 Tom && Jerry is another free Tom and Jerry app for Windows 8 devices that will allow you to watch Tom And Jerry episodes online. When you launch this app, you will be presented with large tiles of different seasons of the Tom and Jerry show, clicking on which will list the episodes available in each of those seasons. When you choose an episode by clicking on it, you will be taken to the video playback screen which has the controls to play, pause etc. at the bottom of the screen. Another handy feature of this app is that it fully supports video playback even in snapped mode, and thus you can easily multitask while using this app. You can return to the main screen of the app at any time by clicking on the back arrow button at the top left screen corner. 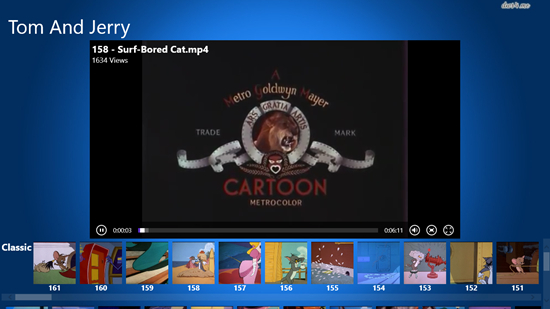 Tom And Jerry Full is another free Tom and Jerry app for Windows 8 that allows you to watch Tom and Jerry videos on your Windows 8 device. The app has a very minimalist interface with the video player at the top, and the list of episodes in a scrollable manner at the bottom. The video list can be scrolled both vertically and horizontally to reveal more episodes and more seasons of Tom and Jerry. Clicking on a particular episode begins its playback in the video player interface at the top, and this allows for easy watching of episodes. The player has standard controls that let you play the videos in full screen, play, pause, seek etc. The app is pretty lightweight, and overall it provides a nice experience of watching Tom and Jerry on your Windows 8 device!

Get Tom And Jerry Full. 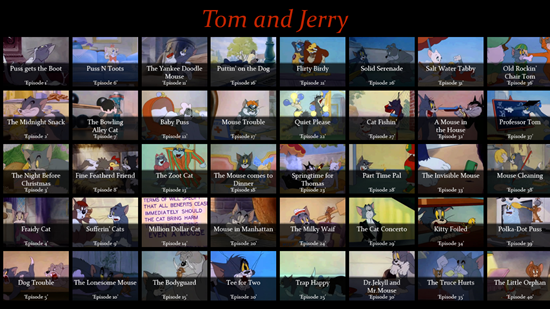 As the name of the app clearly suggests, Tom and Jerry is a free Windows 8 app that lets you watch Tom and Jerry videos on your Windows 8 device. Upon launching the app, you will be presented with a scrollable list of tiles of all the Tom and Jerry episodes that you can click on to start their playback. The video playback starts in the next screen in a video player interface with all the standard controls of play, pause, forward etc. Also, you can return to the launch page of the app at any time by clicking on the back arrow button in the top left corner at any time. In the main page of the app, you can right click to reveal the control bar, and here you can find the option to change the video quality to low, say if you have a slow connection. You can change the quality back to high using the same option!

Get Tom and Jerry.

So guys, this concludes my list of 5 free Tom and Jerry apps for Windows 8. Which one is your favorite? Do let me know!