Here is a list of 3 free DJ apps for Windows 8 that will let you mix, scratch, and play 2 songs simultaneously on your device. All you have to do is to download these apps, and get started with using them!

The interface of each of these DJ apps for Windows 8 is pretty neat, and all these apps are available for free via the Windows 8 App Store.

So what are these apps and how do you use them? Let’s talk about it… 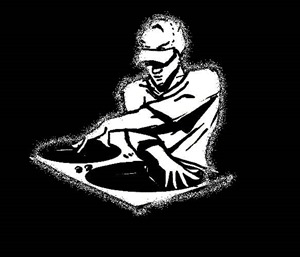 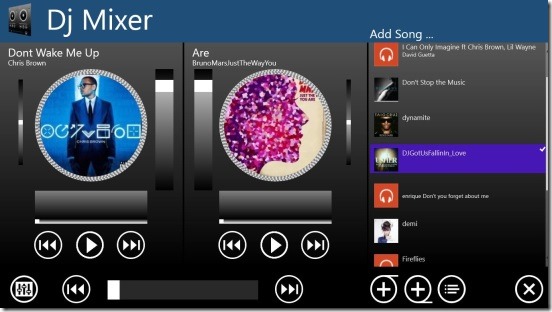 Dj Mixer is a free and fun to use app for Windows 8 devices. Using this app, mixing of songs becomes incredibly easy. When you launch the app, you will be presented with an interface wherein you can use the + buttons from the bottom of the screen and then navigate and choose the songs that you wish to load in the list of tracks that you want to mix. Once you have selected the tracks, they will appear under the Add Song… list. Now all you have to do is to load the songs in the desired decks and start mixing. To do so, click on the track that you wish to load from the Add Song… list, and a tick will appear on that song. Now there are two decks, whichever deck you wish to load it onto, just click the Play button under that deck and the song will be loaded on to that deck. In this way, you can load two songs in two separate decks and play the music simultaneously, i.e., both the music tracks will play at the same time. There is a neat crossfader at the bottom of the screen which you can drag either to the left or to the right to make the clarity of the right/left deck’s song better. If the fader is at the left, only the song at the left deck will be audible, and vice versa. If you want to hear both tracks, keep the fader somewhere in the middle. There is also an equalizer option at the bottom left that has an option to auto-mix the tracks. Using this feature, you don’t have to mix the beats manually, and the songs will be mixed automatically. 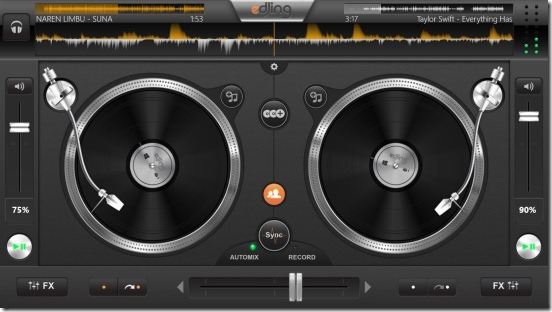 Edjing is a much cleaner DJ-ing software for Windows 8. You will realize this when you install and run the app. In this app, you will be shown two music decks where you can add tracks to these decks by clicking on the + button next to each deck, navigating and then selecting the track you wish to play. The track that you open up will appear in a waveform format at the top of the screen in the deck that you open. This waveform can be dragged around for beatmatching (scratching). You can also scratch by spinning the disquettes of the deck. There are options to play and pause each track, and individual volume controls for each deck. There is also a crossfader like the Dj Mixer app at the bottom of the screen, and to top it all off, it has various effects like Flanger, Beatgrid etc. under the FX tab at the bottom left corner. The app also allows you to mix your recordings, and although nothing can truly replace a DJ’s console, this app works well to at least get digitally close to it! 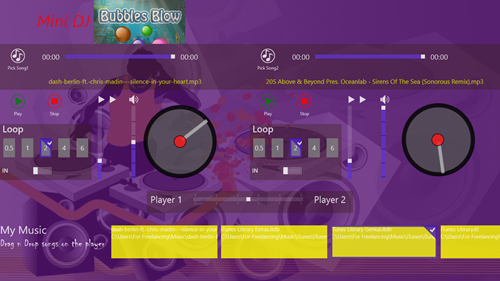 Mini DJ is one ridiculously lightweight DJ-ing app for Windows 8 at just 380Kb. When you install and launch the app, you will be presented with an interface with two decks. Again, all the standard mixing controls are present on the app, including play, pause, individual volume controls for each deck, crossfader to switch between the tracks being played back on Player 1 and Player 2, and the option to select the track that you wish to play back for each of the decks. You can also loop the tracks for time intervals varying from 0.5 seconds to 6 seconds. The way this works is that wherever the time frame is when you select the loop interval, it will exactly pick up the loop interval that you have selected and keep replaying the track. For instance if your music track is at 3 minutes and 4 seconds and you pick up the 2 seconds option, it will take the section of music from 3:02 to 3:04 and keep playing that section incessantly. Pretty cool, right?

This concludes my list of 3 free DJ mixing apps for Windows 8 devices. I actually wanted to explore more apps, but unfortunately, these are the only 3 apps that are available on the store at the time of writing this review, and I do hope that you will enjoy using these apps!