On the screenshot down below you can see the only interface that you’re gonna see when running MemTest. Like we already mentioned, it doesn’t have any kind of special steps that are required in order to start checking memory, apart from of course the fact that you’re gonna have to prepare either the flash drive or the CD that you’re gonna use. 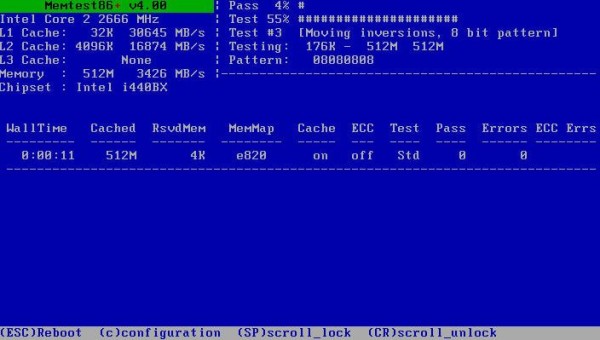 Top left corner holds the information about your memory and other parts of the system. On the right of that section you’re gonna see the current status of the test. Empty list down below is gonna display all the errors that are gonna be found, if you’re unlucky enough to find errors on your memory.

Key features of MemTest are:

Great thing about having faulty computer memory lies in the fact that you won’t lose data, like you would with a faulty hard drive. Memory is also much more cheaper than hard drives, unless you need to buy memory for older computers. Next to downloading the MemTest image for free, you can also order pre-made CDs and USB flash drives for performing these types of tests. Here’s a few pointers to help you get started.

First thing that you’re gonna be needing is a ISO burner, which you’ll need to use in order to burn ISO image of MemTest to a CD. For creating a bootable USB flash drive, you’re gonna need an utility like Unetbootin.

Once you’ve created the bootable CD or flash drive, you’re gonna have to boot your computer off of it. Do this by pressing either F2, F8, F12 or whichever button your computer reports back to press in order to trigger the boot device selector. From the menu select the CD or USB flash drive and your scan should start.

MemTest does a great job when it comes to detecting faulty and problematic computer memory. If you would like to see if you computer is having problems because the computer memory that you have installed is not working properly, then this is definitely the tool that you should try. Give it a try and see how it goes.