SpeedyFox is a free portable utility, which you can use in order to optimize and speed up Mozilla’s Firefox and Thunderbird, as well as Google Chrome and Skype. These days using all of the previously mentioned applications on older computers doesn’t exactly work like a charm, because they are becoming more resource hungry. With SpeedyFox you can make things work a little faster, at least to some extent. 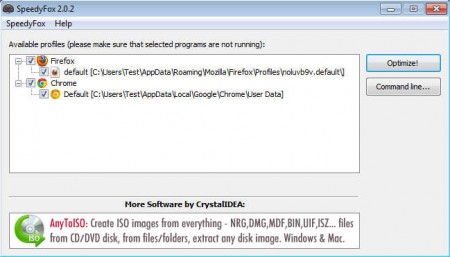 SpeedyFox isn’t a very large application, it’s less than a megabyte in size, and the interface of it, which can be seen on the image above, it doesn’t have a lot of options, which is no surprise because the way that SpeedyFox optimizes and speeds up previously mentioned applications doesn’t require a lot of menus and buttons, one’s more than enough, and that’s exactly what you get. Let’s do a recap, supported applications whose performance can be improved by SpeedyFox are:

On the image above we can see that only two browsers are listed, that’s because these two are the only ones which are installed on our system. All the others were not found on the system and they are not on the list of applications which can be optimized.

How to optimize Firefox, Chrome, Thunderbird and Skype with SpeedyFox

You can start by opening up SpeedyFox. It’s a portable application, there’s no need for installation, just download it, run and you should see the main application window, the one on the image above. You can use SpeedyFox on Windows and Mac, it’s cross platform, which is a big plus, but does it really improve performance of all of the applications that is says it does? We tested it with Google Chrome and Firefox and what we tested were startup times from starting the application to seeing it fully loaded and ready for use. Before optimization was applied, these were the results:

Since we use Google Chrome more heavily and it has more plugins installed, it loads a bit slower for us, let’s see if we can decrease these numbers with the help of SpeedyFox. After clicking on Optimize it started doing its thing: 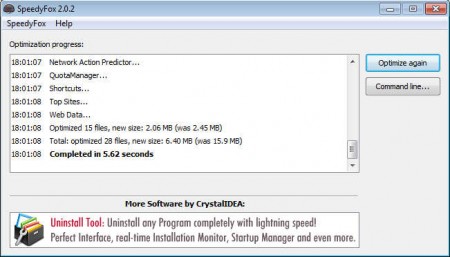 What SpeedyFox does is it scans the cache databases of applications and checks to see if there are files present which could be causing slowdowns. If there are it takes care of them so that the apps don’t have to notice with them when used. After the optimization was finished, we repeated the test and we got these numbers:

Note that we only used a stopwatch to measure these times, we didn’t perform any kind of actual benchmark tests. There are some improvements, and these aren’t caused by the apps being opened and closed already, or because they were running in tray which is what Chrome does. Both of the apps were run several times already during the first test, and then right away after optimization. You might get different results, the important thing is that SpeedyFox is free, so it doesn’t cost you anything to try and see if it really works.