ImageKlebor is a free software tool that can combine different input images into one single output image. The input images can be parts of a sliced image or even a frame of an animation. Such tools are broadly referred to as Panorama software.

ImageKlebor comes in two versions – the graphical user interface (GUI) version which enables the user to do it by himself/herself by putting together the images visually, and the command line version for the advanced users working at pipeline integration and wish for task automation. 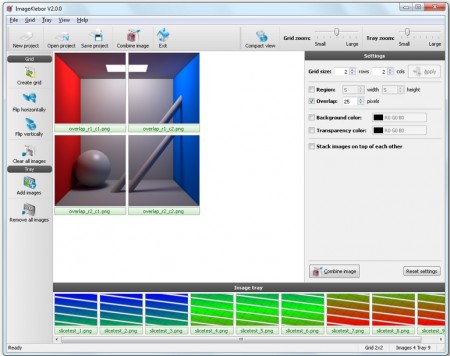 ImageKlebor is a very user-friendly software which can be handled even by a novice. It consists of grids, the number of which can be increased or decreased as per user requirements, and the frames or images can be randomly arranged on these grids. Once the grid size has been selected, the user can get the images that he wishes to combine. It can either be opened through directory mode or by simply dragging and dropping. Finally, clicking the ‘combine image’ option gives the output image in your desired output folder. As you would have realized, ImageKlebor serves a very specific need, and this is not something that can be easily done by other image editors.

Here are some of the Navigational Features of ImageKlebor:

ImageKlebor is available for Windows, Linux and Mac. While for Windows it’s an executable file, for Linux it comes as an extractable archive and for Mac it’s in the form of a disk image.  You can use a free image optimization software to reduce image size of combined image. You can also try free software to combine videos.