ClickyMouse is a software that you can use in order to automate Windows tasks and assign the task that you automate to certain mouse gestures. The technical term to what ClickyMouse has to offer would be macro command recording, and this feature which ClickyMouse is offering can come in handy in a number of different situations, for example if you want to access your application more quickly without even clicking your mouse, if you’re to lazy to do even that ;). 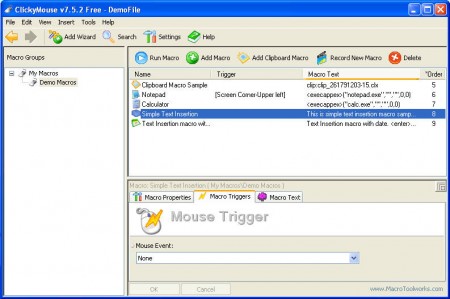 Macro recording is offered by Word for example, there you can record a task that you need to repeat over and over again so that you don’t have to do it, just set the program and it will execute that action, ClickyMouse works on the same principles, only it’s introduces the mouse and puts it in the role of the trigger for a pre-recorded command.

How does ClickyMouse work exactly

Default screen that waits for you which is shown on the image above shows that the program comes with some default Macros that you can use and test out some of the program basics. These macro commands are not something too complex, the one that we’re gonna show the working of would be Notepad activation. 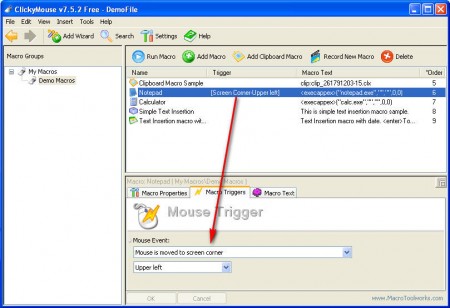 After selecting the command that you want from the list, on the bottom part of the program area you will be presented with Macro properties, triggers and text options. For now just select the Trigger tab. In the Mouse Event tab Mouse is moved to the screen corner should be selected and on the window below that select which corner will activate the command. The corner that you pick will be where the command will be executed after you set your mouse pointer into it, we tried it and it really works. 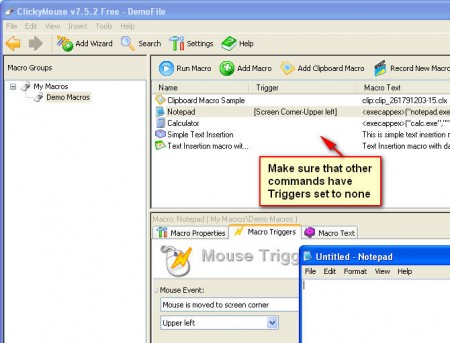 As the warning on the image above says, macro commands will by default have the same trigger set, so you will get a list of programs or actions that you can choose to run, if you want just one, to run Notepad like we did on the image above, you’re gonna have to set triggers of all the commands to None.

Some cool ways that you can activate a certain command are:

Recording a command with ClickyMouse

Having cool ways to make things happen with your mouse is nothing if you don’t know how to create the command that you want. To do that click on the Record New Macro button, and then select Record Now on the pop up window that appears, ClickyMouse will then minimize to tray, leaving only this: 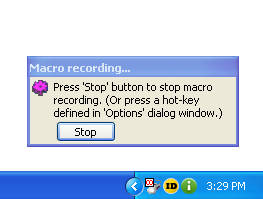 Everything that you do on your desktop until you click on Stop will be recorded and you’ll be able to run that action with the help of your mouse. What we tested is the free version of ClickyMouse, there are also paid versions, but the free one worked wonders for us, and if you are not too demanding user, it will surely do the same thing for you, visit the developer website for more info.