Here’s a list of 5 free Blu-ray burning software for Windows 10 which you can use to burn Blu-ray discs on your Windows 10 powered devices. Blu-rays are great for backup because they can store a lot of data, and will last a long time, if properly handled. Those who are interested in burning high definition videos will also need to use Blu-rays. Programs that I tested range from simplistic ones, which support just disc burning, to the more advanced ones, that support things like cover printing and a wide range of file types. 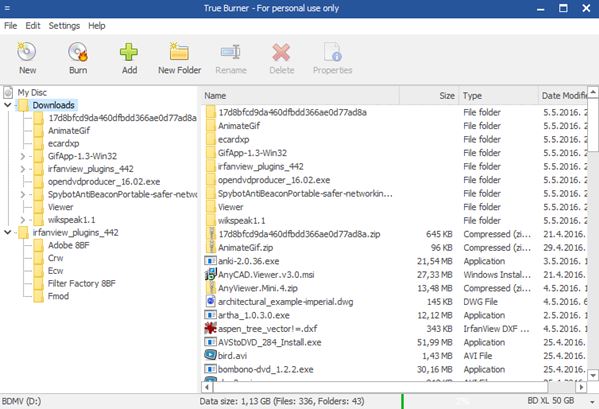 True Burner is a Blu-ray burning software for Windows 10 that comes in a very lightweight package. Despite that it still packs quite a punch. What I mean by that is it’s small (2MB). You can use it to create both data and multimedia Blu-rays. During the new project setup, True Burner gives you the option of creating data or video (BDMV) Blu-rays discs.

CDs and DVDs are also supported, as is burning bootable discs (for operating systems). It doesn’t take long to figure out the interface. Toolbar up top has everything needed for setting the parameters of the burning process. Down below is the file browser in the left sidebar and the list of files that you want to add to the Blu-ray. When all the files that you want to burn are added to the list, click on the “Burn” button. Burn settings window will appear, where you can select the burner, burning speed, burn type, and lastly start the burning process. 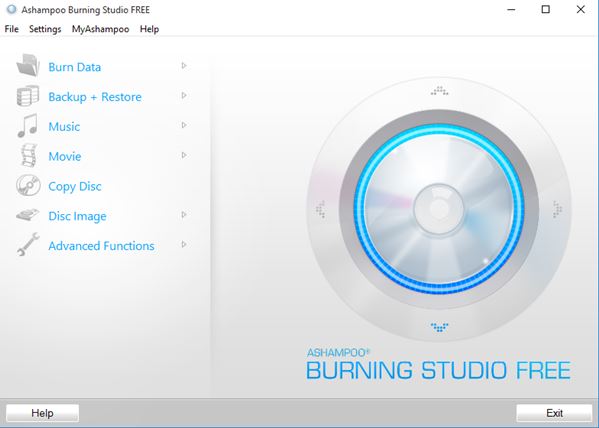 Ashampoo Burning Studio Free is the free version of a very popular disc burning software. It’s a full fledged Blu-ray burning software and it works just fine on Windows 10. Other two popular optical media types are also supported, CDs and DVDs. During setup, you don’t need to select the disc type. Program will automatically adjust it according to amount of data selected to be written.

As you can see from the image above, a wide range of disk types can be created. Videos, images, music, data, video DVDs, video Blu-rays, you name it. Disk copying is supported, both directly (disc to disc) and via creating disc images on the hard drive. Music ripper for ripping songs from Audio CDs is also included, as is cover printing, etc. 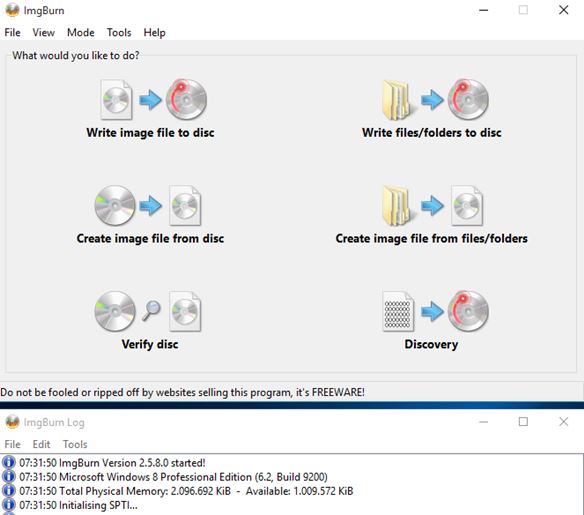 ImgBurn is a Blu-ray burning software for Windows 10 that’s very small in size, around 3MB. Its small size means that it doesn’t have that many features, but it can still be used to burn data, copy discs and create multimedia CDs, DVDs and Blu-rays. 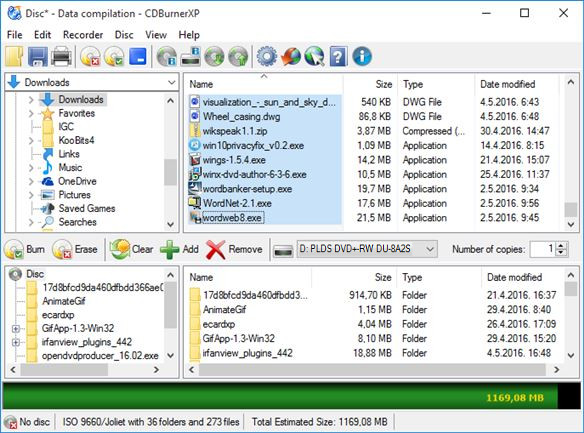 Despite having CD and XP in its name, CDBurnerXP is a CD, DVD and Blu-ray burning software that’s fully supported by Windows 10. It supports data, video and audio disc burning, as well as ISO burning, disc copying, bootable disk creation and more.

Disc settings are automatically detected depending on what kind of disc type is in the burner (CD, DVD, Blu-ray). Creating a burning project is pretty straightforward. Just select the disc type from the main menu and then add the files that you want to burn, see image above. Built-in file browser makes adding files very easy. Select the device you want to use, number of copies, and click “Burn”. In another last step of the setup, you’ll be asked to tweak the burn speed, select burn method, etc. Label printing is supported, which is great if you want a label printed for you audio CD, or Blu-ray movie, for example. 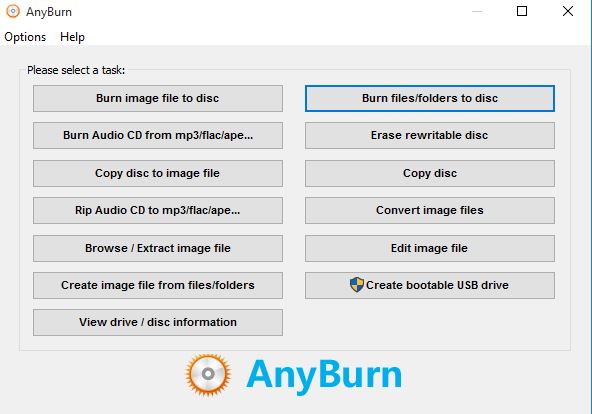 AnyBurn is a small Blu-ray burning software that comes in a very small package, just around 1MB. It has all options that you’d need for creating all kinds of CDs, DVDs and Blu-rays. Image above shows the main menu with all the available disc burning operations.

On top of the usual options that I already mentioned like burning data discs, audio/video media, disc copying/image creation and so on, you can also find features like creating bootable USB drives, disc info viewer, audio CD ripping and more. Audio CDs can be ripped into MP3, FLAC and more. Setup is pretty straightforward, just select the appropriate option and add the files you want to burn, or tweak the copy settings, depending on what you selected. When finished, click “Burn” and wait for the process to complete.

Out of the 5 Blu-ray burning software for Windows 10 from the list above, the ones that I enjoyed using the most are Ashampoo Burning Studio Free and CDBurnerXP. Ashampoo is the most advanced burning software out there, and if you need advanced features then definitely have a look at Ashampoo. CDBurnerXP is more lightweight, but still has a decent set of features.