Here’s a list of 3 screen capture to GIF extensions for Chrome which you can use to record activities within the browser window and then automatically create GIF animations out of the recordings. Screen capture is a great way how you can explain something to people (in case of Chrome, how to delete cache, for example), and GIF images can be viewed more easily than videos (codes aren’t needed), so combining the two makes sense. 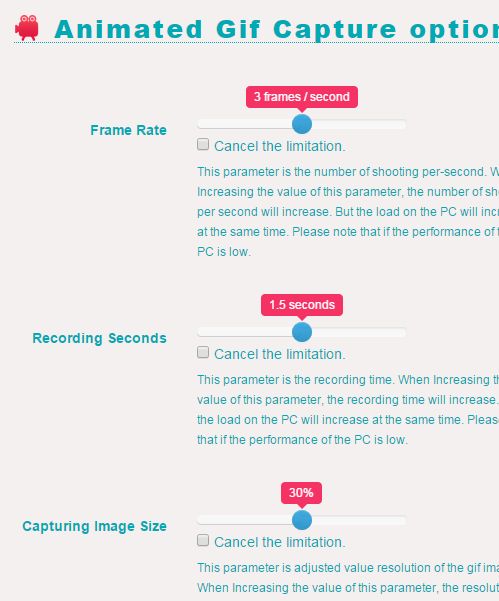 Animated Gif Capture will let you record the entire Chrome screen or any other desktop application that you might have running. Yes, that’s right, screen capture is also possible outside of Chrome.

The only thing that you need to do is tweak the extension settings, select the GIF size, quality and the type of recording (tab or desktop window). You can record either the entire tab or one of the active desktop windows (of other programs you have running alongside Chrome). Finished recordings will automatically be downloaded and saved to the Downloads folder, as GIF. Drawback of Animated Gif Capture is that it only supports fullscreen capture. Created GIFs have to be resized (to have smaller size) and once you do that, everything looks small on the GIF itself.

Also, have a look at Chrome Extension For Screen Capture: TechSmith Snagit. 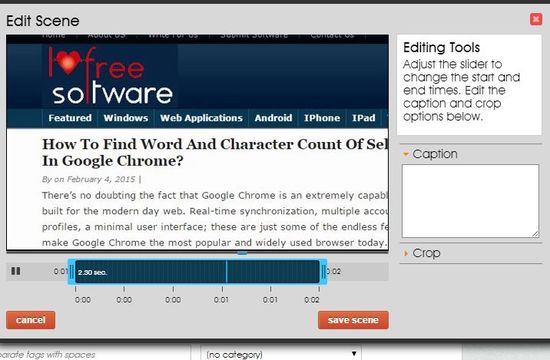 Riffsy Creator is interesting because it lets you create recordings out of screen selections, not only the entire tab or the entire window. This means that you can focus in more on a certain section of a website and produce a more clearer GIF.

After clicking on the top right corner icon, selection marker will pop-up in the currently active tab. This selection marker is for selecting a section of the screen that you’d like to record. After you click Capture on the end of the selection box, recording starts. It can be stopped by clicking on the top right corner icon. Stopping screen capture immediately takes you to the Riffsy website, where recorded animation is going to be prepared and opened inside an editor, see image above. To use Riffsy Creator, you will need to register an account with the website.

cally speaking this is an extension for creating screenshots, but it does have a video capture component (have a look at the image above). It can be used to create recordings of screen selections or the entire screen. Created captures are saved to Google Drive (you need to give the extension permission to access your account) and opened up in an editor from where you’ll be able to save and export them either as static images, GIFs or straight up video.

Also, have a look at Aviary Screen Capture Chrome Extension.

Even though, there’s several more screen capture to GIF extensions for Chrome in the Chrome Webstore, a lot of them aren’t functional. The three that I mentioned above worked for me, and out of these three the one that I suggest the most is Riffsy, mainly because it’s easy to setup. It even has an editor that you can use to tweak the GIF animation after it’s created. Let me know what you think and make sure to make suggestions in comments down below.