Another interesting feature of Snagit is that, you can launch the Snagit extension from Chrome App Launcher to view your screen snapshots. You can easily view your library anytime by launching the TechSmith Snagit from Chrome App Launcher. The library of the TechSmith Snagit extension compromises of the captured screenshots only.

How To Use TechSmith Snagit Extension:

It is very simple to use the TechSmith Snagit extension for Chrome. 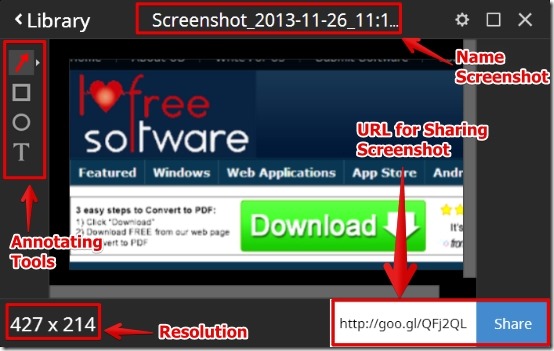 To annotate the captured screen area, you get basic but really cool tools that include:

You can even change the color of the tools from Red, Yellow, Green, Blue, White, and Black.

The great thing I liked is that while you do your work, you work is saved in you Google Drive as the syncing is done automatically to your Google drive. It’s a great feature that makes your captured screenshots accessible anywhere on the web by using your Google drive.

You can even share your work in Snagit. As Snagit offers you to do so by using the sharing button. You will be provided with the URL of the screenshot which you can use to share the captured screenshot with anyone.

You might also want to try out Grabilla. It is free screen capture software that also provides video recording facility.

TechSmith Snagit is a really cool free Google Chrome extension for screen capture. You won’t need any software in your computer if you have Snagit in Chrome. The user interface is simple and very easy to understand. Also, the automatic synching with your Google Drive makes it an awesome extension. I would recommend you to try it out