Here’s a list of 5 alternative gallery apps for Android which you can use as an alternative to the default gallery apps which are provided by all the different incarnations of Android. Alternative galleries that I listed down below offer different sets of features which will expand the basic functionality that most stock gallery apps have. For example they’ll allow you to play GIF animations, have advanced image sorting based on time, location, and more. 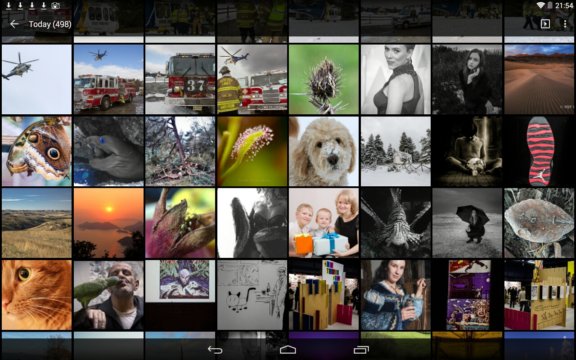 QuickPic Gallery is a small and feature packed alternative gallery app for Android where you can find a lot of interesting features. Starting with the interface which can actually be changed with themes. App offers CM Cloud online storage for syncing your photos with other devices. Other image hosts like Picasa, Google Drive, Box, 500px and several others are also supported and images hosted there can be accessed. I’m actually browsing 500px image gallery on the screenshot above.

Gallery itself will automatically detect images on your device, regardless of where you saved them (exclusion possible to setup in settings). They are grouped in folders by default, but you can activate something called “Moments” if you want which will group images based on the month that they were taken. Other features include Wifi image sharing and find tool. 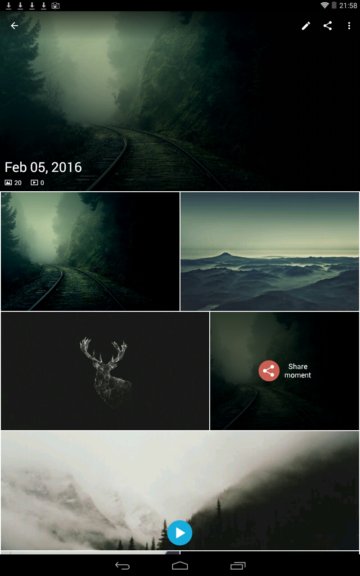 Gallery by Flayvr has a similar set of features that QuickPic has. Right off the bat, after launching the app, it will ask you if you want to login to Picasa and load up images from there, so Picasa is supported. Cloud backup offered by the developer is also available, but it’s not free.

As for the gallery itself, it has 2 work modes actually. “Standard” work mode will detect all the photos on your device, but there’s an option to hide folders in settings afterwards. In this mode you get the already mentioned “Moments” functionality (both based on time and location), sorting can be changed, etc. Next to this standard work mode, there’s also “Smart” work mode. Key addition of smart galleries is the ability to track which photos you opened most and make their thumbnails bigger when browsing the gallery. Another thing that they’ll do is generate special galleries of all your most frequently used images, so they are more easily accessed.

Get Gallery by Flayvr.

Also have a look at 4 Gallery Lock App For Android. 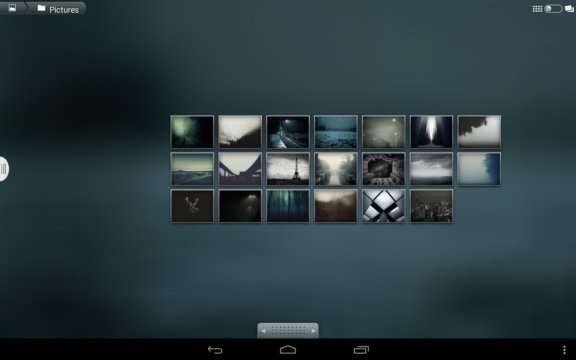 Gallery by Latest Application doesn’t go quite as bit into extremes when it comes to functionality, the way that the two previously mentioned alternative gallery apps for Android have gone. There’s no smart galleries or anything like that.

Where Gallery by Latest Application shines though is with gallery design and size. It’s just under 900kb in size so it’s perfect for those with limited storage. Gallery plays animations when opening folders and swiping between pages of photos. They are grouped by default according to the month that they were taken. Slideshows are supported with smooth transition effects. Small drawback of the app are ads, but they are not too distracting.

Get Gallery by Latest Application. 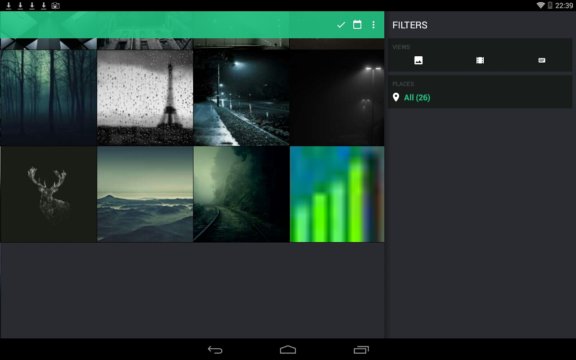 With 10MB in size, Piktures is a bit on the heavier end when it comes to app size (especially when previously mentioned Gallery is 800kb). Piktures has images in your gallery sorted by date by default. Swiping left activates filters which can be used to sort photos according to number of views, location that they were taken, and it can filter out videos and GIFs.

Yes, like you probably guessed it from the app name, it also supports most video formats and GIF animations as well, just like QuickPic. Swipe right, from the main gallery view, activated folder selector.

Also have a look at How to Sync Photos to Facebook from Android Gallery?. 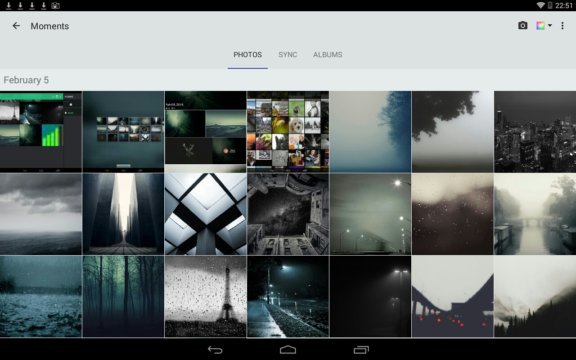 A+ Gallery brings a very interesting feature to the table. It has color filtering, where it allows you to filter photos based on the color hues that it has. Dropbox, Facebook and Amazon Drive are available for cloud syncing.

Built-in editor allows you to apply effects to photos, add frames, perform cropping, mirroring, and even hand drawing. App loads photos in the same “Moments” mode that we already talked about by default. You can exit it into classic folder view if you want by tapping in the top left corner arrow back.

Get A+ Gallery Photos & Videos.

All 5 of the alternative gallery apps for Android from the list above are great. My favorites would be Piktures, A+ Gallery and Gallery by Flayvr. Each one of them has most of the same features, but also a couple more interesting features that make each app unique. Color filtering (A+ Gallery), smart galleries (Gallery by Flayvr) and smooth interface (Piktures) would be those unique features. Pick one and let me know which one it ended up being in the comment section down below.