MynderMail for Android is an app to send an email to yourself with a single touch. You just need to open the app, type the text for the email, and send it. The email will be sent to your own email ID and can be used to remind yourself about something or just to save Notes. The app has a simple user interface which only has a text field and the option to send the email instantly. There is not even a separate text field for Subject and the app automatically sets the first line of text as the subject. You can Set any Email ID as the Default recipient so if you frequently email someone a lot, you might as well enter his/her Email ID in MynderMail for Android’s Settings menu.

This review is relevant for a specific set of people. Different individuals have different ways of Reminding themselves of specific things in their routine. Some users simply set a Reminder on their phone, while others prefer to set alarms. Some have a different habit though– that of sending an email to their own email ids. This is sometimes extremely convenient and something that even I do on a daily basis. Why? Because my Email IDs are something that are an integral part of my daily schedule, be it at work or at home. And since most of us do check our Inbox daily anyway, having an email with the required content just to remind of something is a subtle, yet better approach sometimes. Read on if this is something that you already do, or, if you too would like to try it! 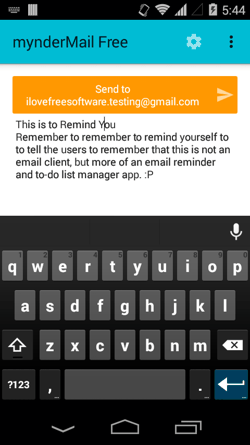 Send Email Reminders to yourself with MynderMail for Android

MynderMail for Android is neither exactly a Reminder or Note taking app, nor is it an email client. And let me be clear that it is meant for specific users with a particular use-case scenario. If you are looking for the most feature-packed To Do and Reminder app, you can check out 24Me for Android; and, just stick to the default Email client on your device for Emails. And by the way, using Myndermail for Android is simpler than tying up your shoelaces. No, seriously!

Just open the app and you will be greeted with a screen which has a text field and a big orange ‘Send to’ button. To Send an Email Reminder to yourself, you just need to Enter the text and tap on the Send button. If you want to set a subject as well, just type-in the first sentence and tap on ‘Enter’ in your keyboard (to end the line) and then continue with the text. The first line will thus be automatically set as the Subject of the Mail which will come to your Inbox (or to the default Email ID you’ve set under the app’s Settings menu). The screenshot below shows the email received in my Gmail app after sending the Email from MynderMail (that is shown in the screenshot up top in this review). 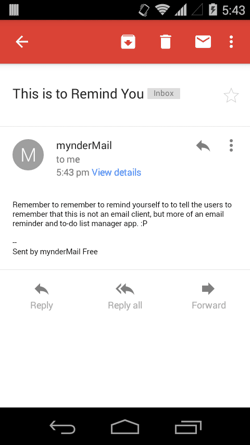 TIP: In the screenshot above, you would notice that it adds a sentence “Sent by mynderMail Free”. You can actually use this to club all the emails sent by this app together. Just go to Gmail and set up a filter for all the emails that contain this sentence, and add a custom label to them. Going ahead, any email sent from this app will directly be available under that label. So, you won’t have to spend any time in looking for reminder emails.

Tap on the gear icon on top and you will be taken to the app’s Settings menu. Don’t expect too much though, you only get the option to set the recipient Email ID here. You do have the option to select the email ID used for sending the Emails; that is, if you have multiple Email accounts on your phone. 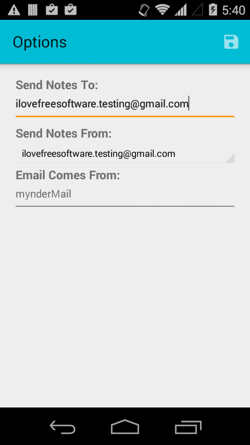 Want to have something similar on your iPhone? You can check out the free app Noto for iPhone and install it on your iOS device

Let me get one thing straight out-of-the-way, this app doesn’t really have any ‘feature’ that you were hoping it’d bring to your device. MynderMail for Android simply adds convenience to what you can already do with any other Email client. But this convenience might be of great help for certain users who rely heavily on sending Reminder Emails to their own mailbox. The app performs without any hiccups and there are no design elements or extra features to talk about — not that it needed them anyway!

The app is available for Free on the Google Play Store so there’s no harm in giving it a try. The link is right below: