Open Hardware Monitor is a free, open source hardware monitoring software that monitors temperature sensors, voltages, fan speed, clock speed, and CPU load of the hardware of a computer. It supports almost all types of hardware monitoring chips that are found on a wide range of new generation motherboards.

Open Hardware Monitor displays the hardware monitoring information on a simple, explorer-like window, which enlists all the hardware devices attached to your system. It monitors the system in real-time and gives clear details about changes in temperature, fan speed, voltages, etc. It also has a RAM sensor that senses the used and available memory in your system and displays their values.

Getting Started with Open Hardware Monitor:

Once you run the application, it will start giving you real-time details of your motherboard temperature, CPU temperature, hard disk temperature, CPU load, memory load, fan speeds, clock speeds, and RAM usage. You can easily configure Open Hardware Monitor to display all, or selected hardware information. Moreover, You can select any sensor from the main window and view it as a customizable desktop gadget, or add the whole application to your system tray area.

Open Hardware Monitor is an all-in-one software to get complete details of your system hardware sensors. It monitors your system’s motherboard, CPU, hard drives, and RAM, and displays real-time temperature values, fan speed, clock speed, memory usage, and memory and CPU load details. It can read temperature details of the core temperature sensors in Intel and AMD processors, sensors of ATI and NVidia graphic cards, as well as S.M.A.R.T. hard drive temperature. 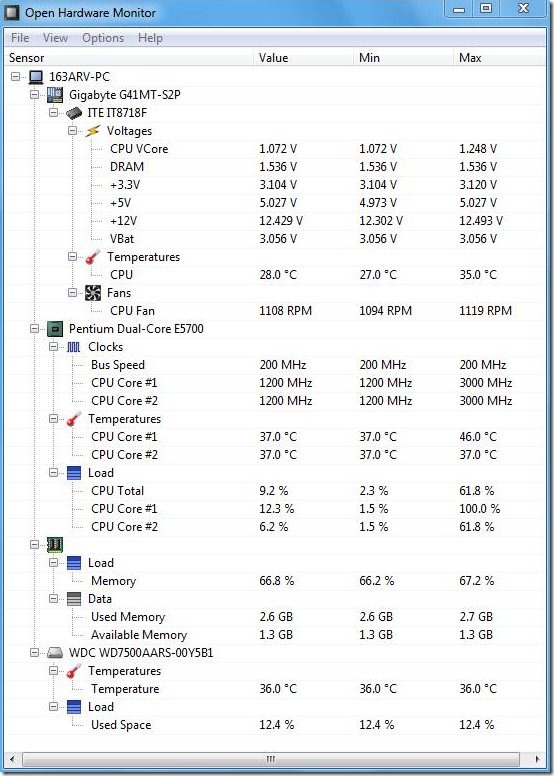 The application supports a variety of hardware peripherals, the details of which, you can get from the website.

Also check out SpeedFan, which can check and control the voltages, fan speeds, and temperatures of the hardware and monitor chips inside your PC and prevent it from overheating.

The only thing to be noted here is that the application is still in its Beta phase of development and might involve few system risks.