Enia player is a free video player that lets you play video files in almost all popular video formats. It’s a simple and handy video player with a nice interface and other interesting features, like creating video episodes and capturing snapshots from the playing video. By default it plays videos in avi, mov, mpg, mpeg, wmv, xvid, and mp4 formats. For all other video formats, you need to install missing codecs using third party tools like Media Player Codec Pack.

The best thing about this free video player is that it doesn’t have a complicated interface, which makes it an ideal choice for people who like simple players. You can get it free using the link given at the end of this article. Once you install it in your system and launch it, all you get in front of you is a nice-looking video player with just the required options placed on the interface.

There’s a toolbar at the top to quickly access commands, a preview window at the centre, and a playback section at the bottom to play/pause videos. The program supports drag and drop which makes it even more easier to open and play videos. Plus it has the ability to play the video from the point where you left it, the last time you closed the program. 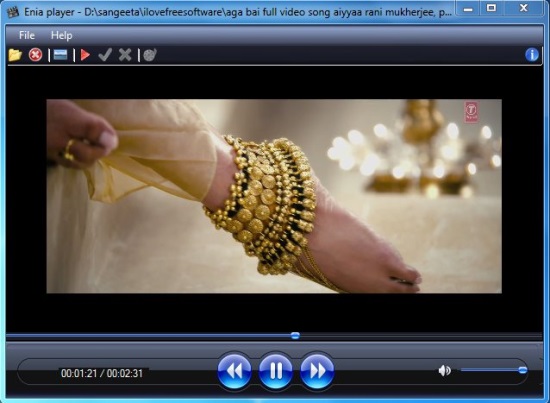 As I mentioned in the beginning, the player also provide some extra features for taking screenshots of videos, and creating episodes from videos. You can create small episodes out of a playing video and export them in any of the supported video format. Plus take snapshots of your favorite scene and apply it to your desktop background or share it with friends. The snapshots can be saved in JPEG, GIF, and BMP formats. You can either use tools listed on the toolbar or access these options by right-clicking anywhere on the playing video. 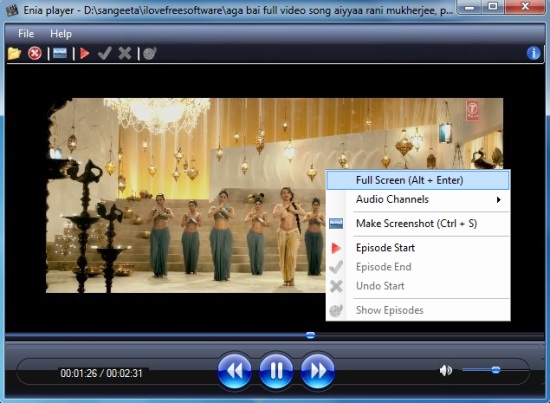 Enia Player is easy to use, and comes with some interesting features. The interface looks much like the old-age Windows Media Player, which make it familiar to use the software. We especially like the feature to create screenshots from videos, and create episodes from videos. However, it has some noticeable shortcomings, like there’s no way to create video playlist, no playback control to move back and forth between the played videos, no graphic equalizer settings, no option to change the aspect ratio, and so on. But if you want a simple video player for your system, you can give a try.

If you want to look around, you can also check other media players, like Clementine, or even Desktop Youtube Players.