Media Player Codec Pack is a pack of free media player codecs that can you install on your computer to play most of the media files.

Computer users who often try and play media types that aren’t quite standard or are in a slightly older format to usual will often have the terrible problem of their media player refusing to play the files. Often, the issue lies with the fact that the media player being used does not have the codecs required to play the video file in question…

Most computer users have no idea where to find codecs for various media types and so are likely to just give up on the video. However, with this pack of free media player codecs, the entire process becomes very easy and entirely headache free. Then you can play all the popular video formats on your favorite media player. 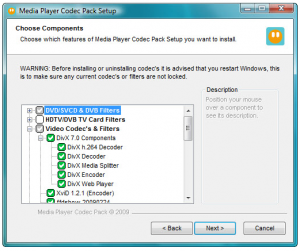 All Of The Media Codecs You Need… In One Place

The advantage that this free pack of media player codecs has is that it provides all of the codecs that any computer user will need, all within one download. For the users that have little expertise, this is a quick fix solution to the ongoing problem of having to play various different media formats that may need different codecs.

The installation procedure is a very simple one with users simply able to tick boxes to decide which of the codecs they want or need. If the need for extra codecs arises, then the tool can be run again and the further codecs selected. It can be a continuous solution to ensure that every media file you want to play is able to play on your machine.

However, if you are using a media player like BS.Player, ALShow, or GOM Media Player, you would most probably get the required codecs automatically.

To conclude, Media Player Codec Pack is an essential tool for anyone who plays a lot of media on their computer. The pack of free media player codecs covers all of the bases for possible media codecs, ensuring that you can comfortably play almost every media file that you will ever need. Another similar free software that we reviewed earlier is Codec Installer to install missing codecs.