Stealth Bastard is a free stealth game for Windows PC. Play this 2D fast paced action game; where stealth is your main weapon.

In this stealth game you have to solve puzzles and escape from robots or lasers to reach the exit. You can edit your own levels or download maps that are created by others. This game is absolutely awesome and good brain teaser. You will feel like Batman playing the role of Tom Cruise in Mission Impossible movie. 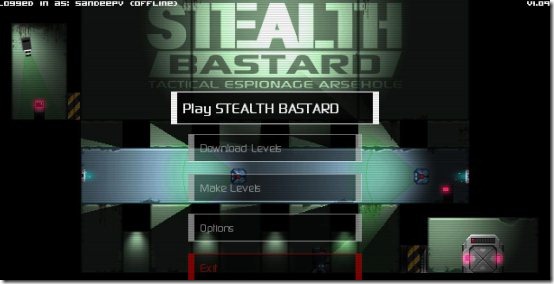 This game Stealth Bastard has an apt tagline “Tactical Espionage Arsehole”. You are the stealth bastard and you have to perform stunts; like in the movie “Mission Impossible” to complete missions. You are an one man army and the robots literally hate you. You are equipped with night vision goggles and use the dark areas (like Batman) as your one and only weapon to cheat the infra rays and robots.

As soon as you download and install the software, you will find the game folder in your C Drive; named StealthBastard. As soon as you start the game you will be asked to register a username and password (no visiting the website or email verification stuff). Then you will see the main screen like the above screenshot. So, start playing right away as the controls are also pretty simple like: left and right to move, up arrow to activate switches, down arrow to crouch, and Z arrow to jump. 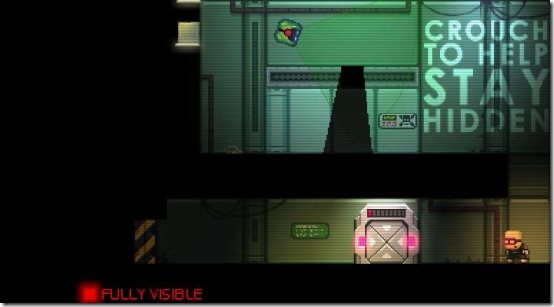 Gameplay Of This Stealth Game:

The first few levels will train you well for the rest of the levels. Though it’s easy to play, the game is definitely hard to master. A timer will be running but there is no time limit and even if you die you can play the level from last checkpoint. The best time in which others have completed will be indicated on top right of your game screen. The level of stealth is indicated at the bottom of your screen, in terms of: fully visible, partially visible, and not visible. If you are visible in areas where there are no robots patrolling or infra detectors, then it’s ok. But if you are spotted by any of the robots or detectors, then in fraction of seconds your body will be made into pieces by the lasers. Then you have to start again.

This stealth game includes puzzle genre also. So, you have to reach for switches which open doors or paths, push large frames to activate switches, block laser rays, etc. By using your analytical and logical skills to solve puzzles and reach the exit. After you complete a level you can play it again to master it against time to beat others’ best time. 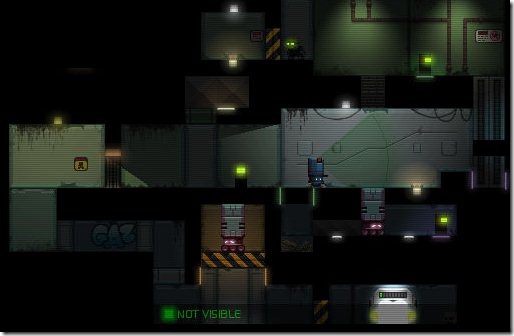 Stealth Bastard is completely stealth based which makes it interesting; even though it doesn’t have weapons or fighting involved. The graphics are really good and sound effects are awesome. You can also try other interesting puzzle games like Sequester and Tag.