Here is a free tool to download tweets from any specific geolocation. TwLocation is a free command-line tool which lets you download tweets in CSV format after taking geo coordinates from you. It uses you Twitter API keys to fetch tweets and save them in a file. In the final file, you can see the location on Google maps as well. Another cool thing with this tool is that you can get the username of people from that area along with their profile URL. So, this tool can also be used to find people from a specific geo-location.

This is a useful tool for social media marketers to get potential users or clients from different locations. And after getting those users, you can pitch them or do whatever you want. All you need to do is just a simple command and get the list of users and corresponding tweets. Although the tool that can run on Windows but I will recommend you to run it on Linux or MAC terminal due to encoding issues. Fo Windows, you can use some CMD emulators such as ConEmu, MSYS, or Cygwin.

How to Download Tweets from any Specific Geo Location?

Using this tool is very simple. It just needs Python that you can get from here and then simply install that on your PC. Do note that, it requires Python2.7 so download this version carefully because 3 is the default version on the website. Next thing you have to do is generate Twitter API keys and then get them ready. You can see this post to see how to generate Twitter keys. Open the config.txt file in the TwLocation folder and add your Twitter keys that you have just generated. 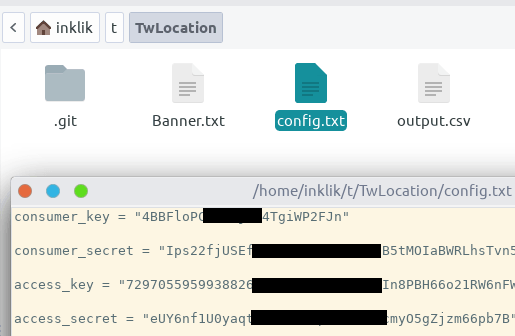 Now, open terminal and clone the repository using git command then cd into the TwLocation folder. After that, run this command to install a dependency.

It’s now time to invoke the tool and to do that, you can run the following command. The program will start and you can see its logo in the beginning. Enter the details that it asks from you such as geo-coordinates, range, and number of results to download. 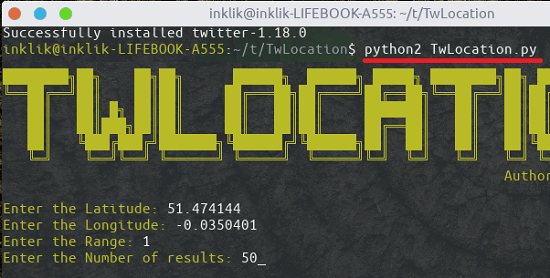 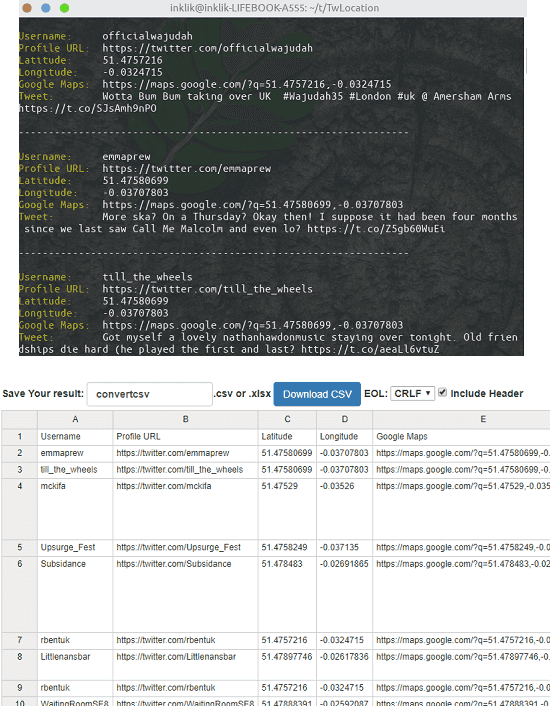 In this way, you can download tweets on your PC form any specific location. It saves all the details in a very nice way and you will like it. But you have to keep one thing in mind that it relies on Twitter API. And Twitter API limits the number of requests so that bots or automated tools can’t abuse it. So, if the tool starts throwing errors then you will have to stop and try again after some time.

If you use tools for Twitter automation then you will really like this simple and command-line tool. Run it right from the terminal and then get the tweets based on location. The only thing that can take time is getting the API keys from Twitter. Otherwise, the whole process is very simple and you can use it on any platform.