Let’s look at the Android apps we were able to find. 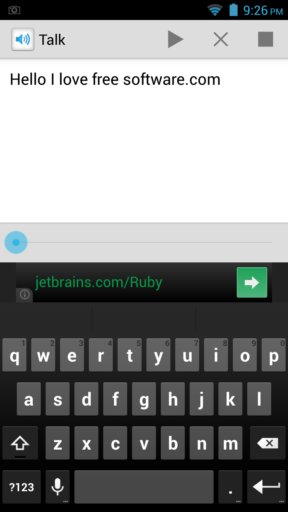 Talk is a TTS app with lots of interesting features. You’ll be asked which text to speech engine you want to use when you run this app for the first time.

Empty text field is the first thing that you’re gonna see. Here, text that you want converted to speech needs to be pasted. App lets you load texts from web browsers directly into the text field. From other apps text needs to be pasted manually. Lots of languages are supported, but you’ll need an active internet connection for most of them. Converted text to speech can be exported and saved as a WAV file. Speech is very accurate and the voice is easy to understand.

Get Talk – Text to Voice FREE. 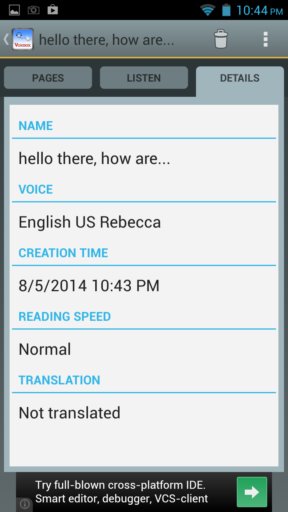 IVONA Text-to-Speech HQ is a set of dozens of different natural sounding TTS voice for your Android device.

These are just voices that can be used by TTS apps like previously mentioned Talk. Next to English, you also get French, Spanish, Italian, German, Welsh, Polish, Icelandic and Romanian. This app that we linked down below is just the manager app through which each language is downloaded (~150MB worth of download). What’s great about these you’re wondering? They are realistic voices from actual humans, not a synthesized robotic voice. 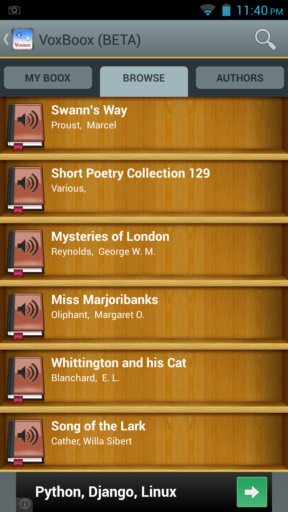 First, it has a library with free access to thousands of audio books that you can enjoy (uses up lots of data, be careful). It has its own voice engine with a realistic female voice. Next, it can convert text from URLs directly into speech, from a website article for example. Lastly you can load TXT, PDF or DOCX files and convert them into speech, audio tracks. Voxdox is also an ebook reader, with support for EPUB, PRC, MOBI and MBP. They can also be converted to speech, if you’re too lazy to read.

Get Voxdox – Text To Speech Pro. 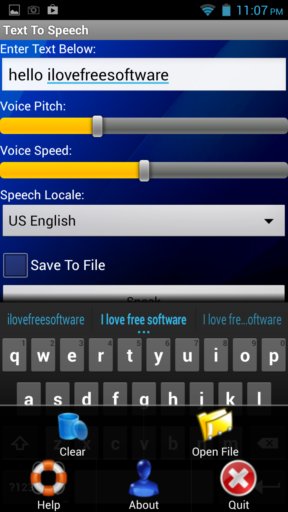 Here’s an app that has a very descriptive name, Text To Speech. It’s of course a TTS app very similar to Voxdox, but not quite as advanced.

What do you get with Text to speech? Support for 6 languages, English, British English, Italian, French, Spanish and German. Voices are genuine human voices with adjustable pitch and speed. Text can be typed or copy-pasted into the text field and then played right away, or you can alternatively load it from a TXT file. Converted speech can be saved as a WAV audio track and re-played later.

Get Text To Speech. 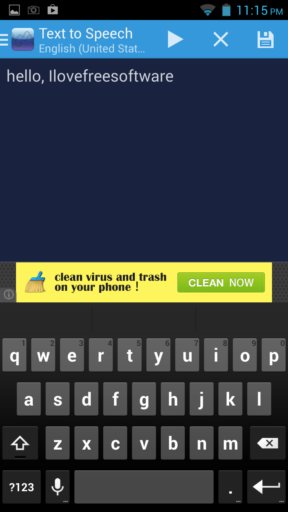 From very advanced we come to the very simple. This app is called Text to Voice and it’s a basic TTS app that can only convert text to speech from text that you type into the text field.

It uses external TTS engines, and the only settings that you get are pitch adjustments and voice speed manipulations.

Get Text to Voice.

Our picks are Voxdox and Text to Speech, plain and simple. Voxdox surprised us with it’s set of functionalities. So much so that yours truly added it to his own personal “app drawer”. Try them all and let us know what you think in comments down below.