Air Shark 2 is a free Arcade game for PC. The Game requires you to pilot an Army Helicopter (Westland Apache.. Pretty Bad-Ass if you ask me!!) and kill those endless hordes of Enemies (who, by the way, use a lot of pretty rad stuff). Simply put, the game’s this: The enemies have entered your territory, and you are the one who’s charge to take care of them , and of course you get points for that. There are 18  fun filled levels for you to unleash the killer in you, and 3 different bosses (You know, the big mean, pretty much indestructible enemies). The game is small at under 24 MB in size, but packs quite a punch in almost every department, from audio to gameplay, which is quite an impressive feat for such a small freeware.

Air Shark 2 is subdivided into 7 different levels. In each level, you start with a basic helicopter mounted weaponry. It’s good, but as you keep progressing, you keep on getting upgrades (as well as cool stuff like nukes, pulse emitters and the likes). The helicopter can be maneuvered in all four directions but you’ll find yourself moving just left and right as the assault keeps getting harder (And that is really awesome; Guns, Fire, Explosions, the whole deal), Every single enemy vehicle (boats, choppers, tanks) have a red health line. Every time you hit them, it decreases. And when it touches nada, they are gone for good.

Needless to say, as the levels progress, those red lines get more difficult to get rid of. There’s also a multi-player option, so you can invite your friends to kill with you as well.

The controls are very basic and fairly intuitive, you fire with the left click of your mouse, pilot your helicopter via  mouse (Just move the mouse in the direction you want your chopper to go). You can also navigate the helicopter with the four directional Arrow keys of your keyboard, though I prefer to use the mouse. Each stage ends with your big helicopter landing on a giant Helipad, conveniently marked with a big H.

Gameplay is really good for the size of the game. The initial levels are easy but get increasingly difficult as you progress (Scared already? Try setting the difficulty level to max, and we’ll talk again). There’s a lot of different types of weapons, and you grab more as you progress.

Enough with the briefing, lets hop on to the playing part. Hope you ain’t scared of flying!

Start the installation and in the meanwhile check out this another Free Arcade Game for pc.

How to play Air Shark 2 on your PC:

Step 1: The game starts with the short story, you can skip that if you want to. Choose the “New Game” option from the start screen. Type your Name and hit next. 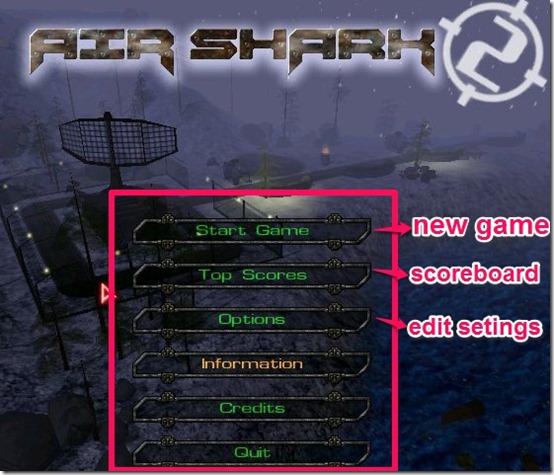 Step 2: Next up, you can select the difficulty level, ranging from Easy to Nightmare (Nightmare being, well, a total nightmare). Hit next to start the game. 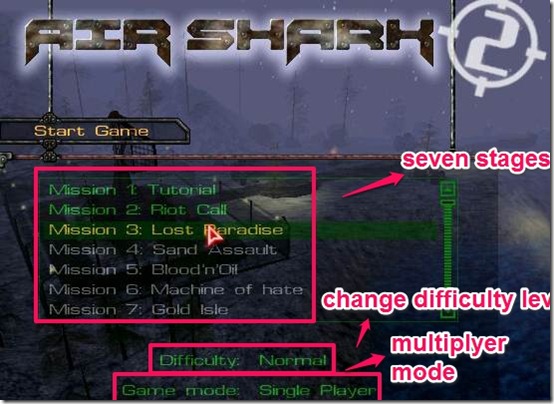 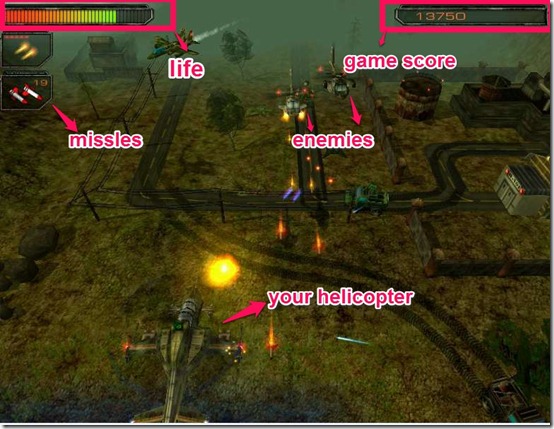 All in all, at just under 25 Megs, this thing is a killer (pun intended).

Of all the small size free games that I have recently played and reviewed till now, Air Shark 2 is definitely the best. The game has all the exciting elements that make for exciting, edge of the seat fun. Air Shark 2 thus, gets a “Excellent” rating from me.

Get your free copy of Air Shark 2 here.