Here is a list of 5 Best Apps to Sync Facebook Contacts with Android. These apps allow you to Synchronize your Facebook Contacts’ profile picture and/or other details with your Phonebook. While some of these apps will sync all the details automatically, others will sync only the profile pictures. Matching and syncing photos individually for each of the Contacts is also an option you might get, while others simply rely on intelligent name matching. Scroll on over to know more! 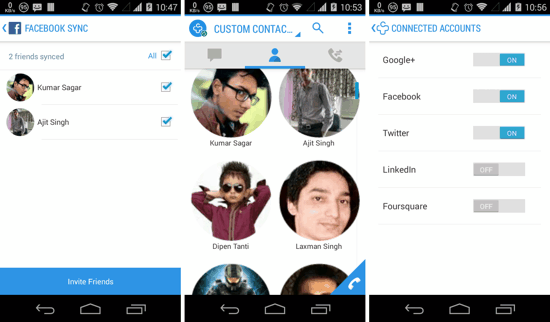 Contacts+ for Android is one of the best syncing tools for your Social Networking accounts. In fact, Contacts+ has been designed specifically to replace your default Contacts (Phonebook) app, that is, if you want to. But even if you are content with your stock Contacts and dialer, you can still use the powerful sync functionality of Contacts+. It can pull the profile pictures and other details from most of the popular Social Networking services, namely Google+, Facebook, Twitter, LinkedIn and Foursquare. It matches the name of the Contacts with their names on Facebook, so if you have saved certain Contacts with their nicknames, you will have to join and sync their Pictures manually for the first time. Contacts+ has a remarkably gorgeous interface with the option to switch between 4 different themes, so you might as well end up switching to Contacts+ if your default dialer and Contacts app is too bland. 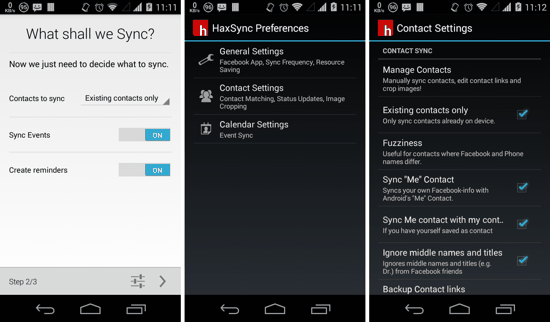 HaxSync for Android is a simple yet powerful app to sync Facebook contacts with Android devices. Using HaxSync has an easy setup, and allows you to authenticate your Facebook account and sync your Contacts in one go. You can select whether you want to sync existing Contacts only, or you can choose to synchronize all your Facebook Contacts to your phone whether you have the name(s) saved as a contact or not. HaxSync then syncs Facebook profile photos, events, and creates reminders from the Facebook profiles. Also, you can open any friends Facebook profile directly by going to the Contact details in your default Phonebook. The app then guides you to the user’s profile in the Facebook app. 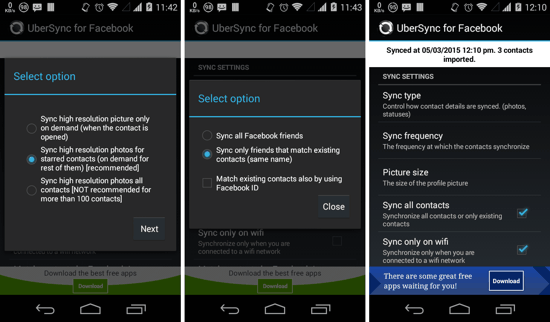 UberSync Facebook Contacts Sync is another app to sync Facebook contacts with Android’s default Contacts app. The app has various settings so that you can tweak the sync behavior for the app. You can set whether to sync all contacts from Facebook or not, and set the picture resolution as well. Do note that Selecting High Resolution pictures (see first screenshot above), will consume a lot of data, so you are better off enabling the ‘Sync Only on WiFi’ option from the app’s settings. Do note that the app is available for free and is ad-supported. 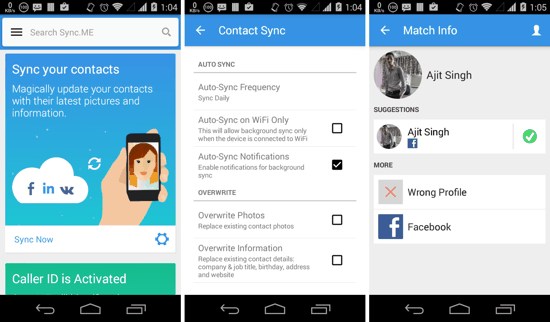 Sync.me is not just an app meant to Facebook Contacts with Android. It is a caller ID and Call blocker app as well! It connects with Facebook to get the users credentials and updates your Phonebook accordingly. The profile pictures will be applied in your default Phonebook as well. And yeah, as I mentioned, the app also acts as a CallerID app. The Facebook contact matching is really great, and lets you tweak any wrong matches that might be done by the app. The whole setup procedure is streamlined, and the app is worth a try! 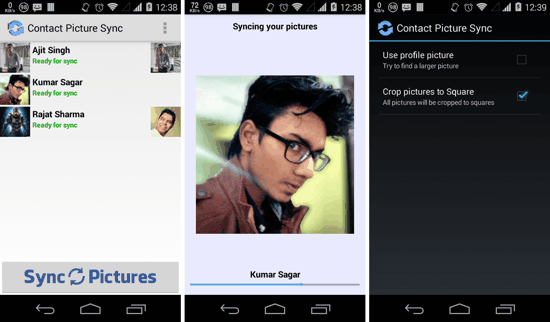 Contacts Picture Sync is another app which gets the work done in just a couple of simple steps. All you need to do is login to Facebook, and this app will match the names, and sync the profile pictures. The app doesn’t support Auto-sync, and you have to match and sync Contacts manually every time. Even though it doesn’t have too many options under Settings, it gets the job done perfectly. Most importantly, it is free and doesn’t have ads. So giving it a try won’t hurt!