Groovon for Android is a community-driven app which can help you discover new Music and lesser-known artists from other users. The app has a ‘Fanscore’ system which determines how big a music fan your are, based on your Social Media Activity (read: Facebook). Groovon then also recommends music for you based on the Music Genre that you like and also based on the Artists or Music from a specific region. Not just that, you can also share your own likes and dislikes with other users like a social networking app. To clarify, this app is basically a Social Networking app for Music fans. 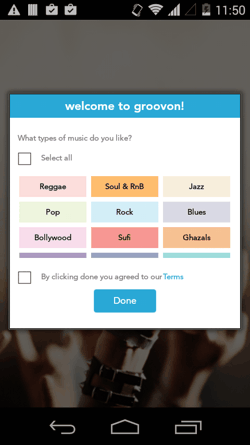 Do note that Groovon DOES NOT  allow you to listen to music, neither does it direct you to the relevant apps or websites. For that, you can check out these 5 Music Streaming apps or these 5 apps for Streaming Music specifically from Soundcloud.

Discover Music and Share your Music Taste with Groovon for Android

When you launch Groovon for Android, you will be greeted with a screen which will ask you to Sign In to Groovon with your Facebook account. Don’t worry, nothing will be shared to your Facebook feed without your knowledge. You will then be required to select the Music Genres that you like.

Once signed in, you will see the main Feeds page of your Groovon experience. There will be recommendations to follow other users and your current Activity feed below that. You can follow any recommended users to see their activity right in your feed. To search for your favourite Music or Artists, just tap on the big ‘star’ icon, which will take you to the screen on the right of your feed (see second screenshot below). Here, you can search for Music based on Region, Artists, and Genre. The results are listed like a top 10 and have columns for the Rank, the Track name, and the Artist name. 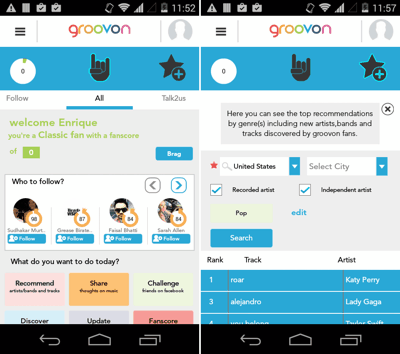 In the leftmost tab, you can see your own  activity and which of them have contributed how much to your ‘Fanscore’. With each significant increase in the Fanpoints (1 Fanscore = 1000 Fanpoints), there is a share button which is used to brag about your achievements to the Groovon Community. This is similar to the screenshot below. 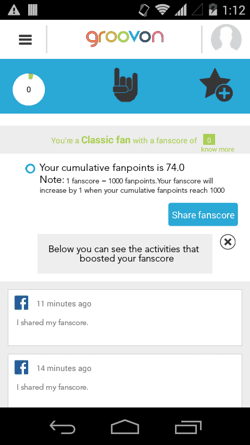 Profile and Settings in Groovon for Android

Tap on the Profile Icon on the top right, and you will be shown your own profile which has the usual editing options and shows your Music Activity on Groovon. 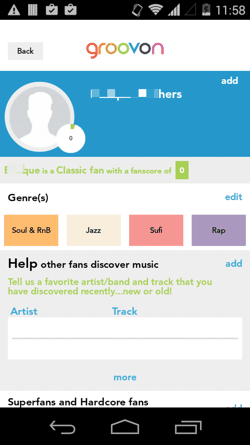 The app itself doesn’t have any Settings Menu whatsoever as the only relevant option under the Settings Menu in Sidebar is the option to ‘Delete your Profile’.

Groovon for Android isn’t a new concept per se. But it is an app which has a different way of execution. The concept of Fanscore is something that’s definitely engaging and might appeal to users in the long run. The biggest drawback with this app is that since it’s community driven, it doesn’t have too many recommendations yet. But that is something that will improve with time. The only ‘bug’ that I could notice was that I couldn’t share my Groovon activity on Facebook, but that might be a device or account-specific problem. Another thing that might be a turn-off for several new users is the fact that the app doesn’t have any clickable links and DOES NOT direct you anyhow to listen to that Song/Artist. Groovon, otherwise, is a great option for checking out and discovering new music for Music fans. Check it out for Free from the Google Play Store.