LockCD is a system utility which will help you out if you ever find yourself in a situation where you need to prevent the CD/DVD ROM tray on your computer from opening. As the program name suggests, once that you install it, LockCD will allow you to lock CD drive or DVD tray while it is being used in an important computer process, so that there are no interruptions. 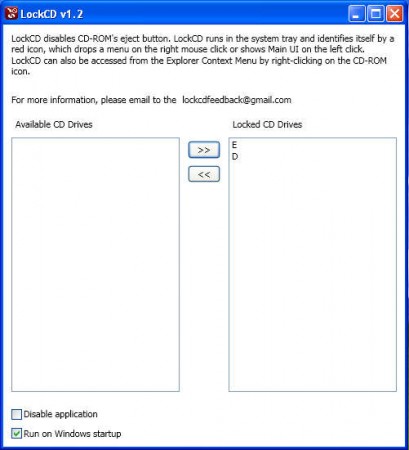 Technically speaking what you see above is not the default screen of LockCD, as you can see from this very basic and easy to follow interface, 2 optical media readers have already been blocked, or should I say locked. Many of you are probably wondering for what exactly would there be need for someone to lock CD drive or DVD drive, well there’s actually several different situations in which having a program to lock up the optical drive could come in handy, with LockCD you can do exactly that.

You can also check out smart PC locker to lock computer when idle.

How to lock CD drive /DVD drive with LockCD

Don’t be confused by the name of the program LockCD, it doesn’t mean that it only works with CD drives, DVD drives are also supported, and perhaps even Blu-Rays, but we haven’t been able to test it out since we don’t have one. If you own a Blu-Ray and need to lock it up, it doesn’t cost you anything to try it with LockCD, it’s free, and the program is very small, so it doesn’t take a lot of time to install and it doesn’t take up a lot of resources. On the image above you can see that we have 1 CD drive which is blocked and another one which isn’t blocked. The left side contains CD/DVD drives which are available, while on the right we have drives which are locked. Mark the drives which you want to lock or unlock and then use the arrows in the middle to place them on the left, unlocked side, or the right, locked side of the program.

Next to locking and unlocking drives from the main menu, there are also options for doing the same thing from the right click dialog of the drives:

At the bottom of the main menu there are two check marks which you can use in order to either disable all currently running blocks, or if you want to allow the program to run during Windows startup.

After a CD/DVD or perhaps even Blu-Ray drive is added to the list of locked drives it will remain unresponsive when you click on the open tray button on the drive. This is great if you are for example listening music from the drive and you don’t want someone inadvertently opening CD tray and stopping the music.

Other uses are also possible, if you for example have an important business program running, which uses your optical drive, and it cannot be interrupted, use LockCD to block the eject option on that particular drive, where CD/DVD is located and then simply leave the program running in the tray, not allowing it to open. Great tool, and best of all it’s free, try it and see for yourself how good it is.