Here’s a list of 3 typing speed tester software for Windows 10 which can be used by those who would like to know how many words per minute they can type. These applications will report back your typing speeds so that you can see weather or not additional practice is needed to achieve the much desired 60 words per minute mark.

Let’s see how exactly it is that these apps work and what do they have to offer. 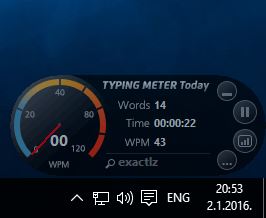 TypingMaster Typing Test is just a single module of TypingMaster, which is an application aimed at learning how to speed type. After launching this software you’ll be greeted with an interface with lots of options, one of which is called Typing Test. Clicking on that option will launch the typing test, where you need to retype a paragraph of text while the application measures your speed.

What’s interesting about TypingMaster Typing Test is the desktop widget for keeping track of the typing speed at all times. This widget will monitor you typing in other applications, in web browsers, text editors, chats for example and after that report back your overall speed, during the entire desktop session.

Also, have a look at Improve Typing Speed by Typing Tweets of Your Timeline. 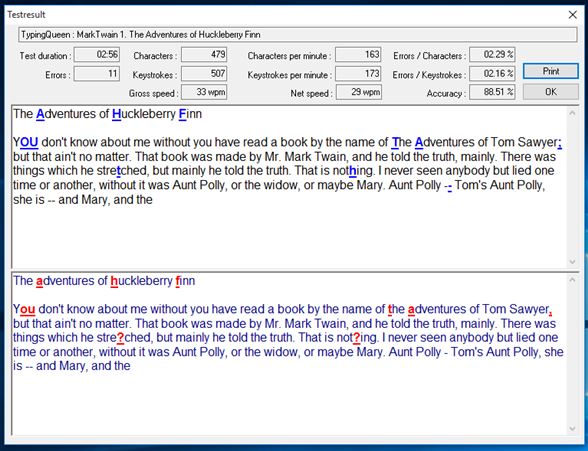 Typing Test TQ is a standalone typing speed tester software for Windows 10, which works pretty much similar to how TypingMaster Typing Test does. First you’ll need to take a paragraph of text and rewrite it in another text box.

Typing Test TQ will keep track of your performance and once you’re finished give you results. Screenshot above shows the test results. Default test will take you around 10 minutes to complete, to re-type everything, but you can give up the test and ask to be show the results at any moment. Results show you the errors you made, how accurate your writing was and more. It’s not just the words per minutes, WPM figure that’s reported, lots of other useful info is available. 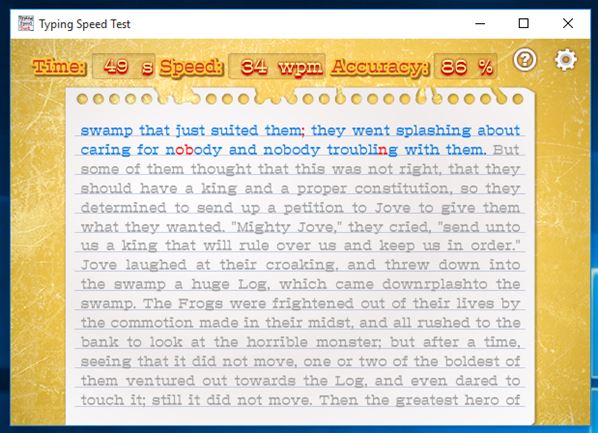 Typing Speed Test is an Adobe Air based application which has live word count tracking. This means that the results are going to be reported as you type text. Notice the line at the top on the image above.

Each one of the misspelled words is outlined in red. They are also outlined to you as you type text. Corrections are unfortunately not possible to make. App reports time you’ve been typing the text and current speed and accuracy of your typing.

Also, have a look at Free Typing Practice Software with Typing Lessons.

Even though the 3 typing speed tester software from the list above is a bit simplistic, apart from TypingMaster, they will still come in handy when trying to figure out how fast you can type. I personally really liked Typing Test TQ, seeing how it has a nice set of features, without having to deal with the advanced functionalities that TypingMaster offers. If on the other hand you need more advanced features that TypingMaster does use, use it, but don’t forget to to also have a look at Typing Speed Test, which is very fun to use. Let me know what you think in the comments down below.