Here’s a list of 5 ringtone maker apps for Android which you can use to create mobile ringtones from songs that you have stored on your phone, from recordings created using the sound recorder and pretty much every other audio file that’s saved on your device. Turning music hits into ringtones isn’t something new or revolutionary, but if you ever wanted to do it on Android, you probably wondered which ringtone maker app is the best.

We tested 5 apps from the Play Store and here’s what we found. 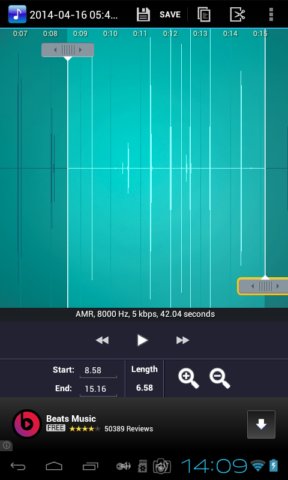 Ringtone Maker makes it very easy to create mobile ringtones because it has all the basic tools required from a ringtone maker app.

When you run it for the first time you should see a list of all the audio tracks on your device. After selecting one, waveform editor opens up where you can start editing the track. Everybody knows that for a good ringtone you need to cut out only the “catchy” part of the song. That’s what we’re doing on the image above. When you’re finished click on the Save button from the top and you’ll be offered to place the cutout as a ringtone, alarm, notification or export it as music.

Get Ringtone Maker by Big Bang. 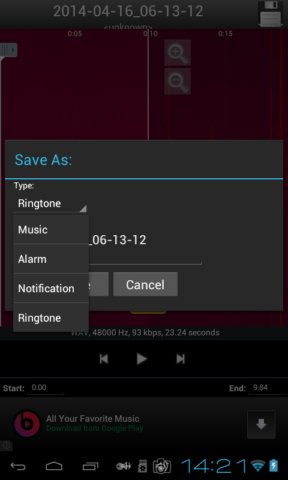 Despite having a lot of similarities with Ringtone Maker by Big Bang, we still decided to include Mp3 Ringtone Maker because in our opinion it has an easier to use interface.

Waveform analyzer is also available here, but the controls are more responsive and precise. This makes it easier to select the section of the audio track that you want to convert to a ringtone. Once you’ve made a selection, tap on the Save icon at the top and you know the rest. 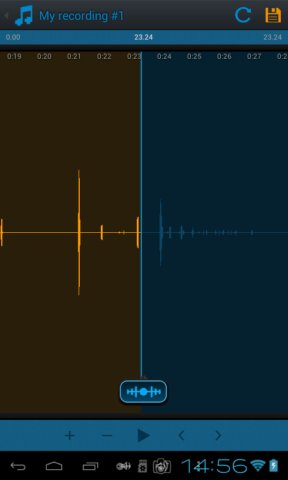 Ringtone Maker Pro decided to do its own thing and on top of having everything that the previous two ringtone maker apps have, also add a functionality or two.

If for some reason you don’t have audio tracks on your device, there’s a built-in downloader that you can use to download audio tracks from the web. Audio recorder is also available. With the waveform analyzer you can fine tune the track same way that we did with the previous apps. 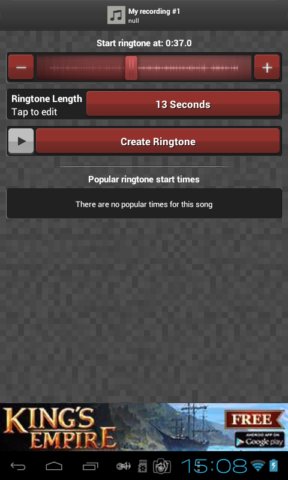 Ringtones can be created using existing tracks, or you can download ringtones posted online by other Mobile17 users (SoundCloud download also supported). To edit a track using the editor you need to set the starting cut point and then set cutout length in seconds down below.

Get Ringtone Maker by Mobile17 Digital or read more. Last app on our list is another ringtone creator/downloader combo, where you can both download and create ringtones.

Use the tabs at the top to switch between the ringtone download list, ringtone creator and manager.

Even though you can’t go wrong no matter which app you select, we suggest that you try Ringtone Maker Pro and Ringtone Maker by Mobile17 first because they have a lot of useful extras, like the ringtone downloader. Try them all and let us know which app you think is the best in the comments down below.