Mobile17 is a free ringtone maker app for Android. It let’s you create authentic ringtones that can be as short as 1 second or as long as 60 seconds. The app’s size is only 1.19 MB, but it works pretty well. Once you load your audio on the ringtone maker, the app’s library finds the edited ringtones of the same song (if it has any). You can download those sample ringtones from the library or continue making one of your own.

It does pretty much the task for what it is made for. The interface of the app is quite intuitive, can make you a pro in making ringtones in no time. The ringtone is installed quickly and can also be used for contact ringtones and alarm clocks. 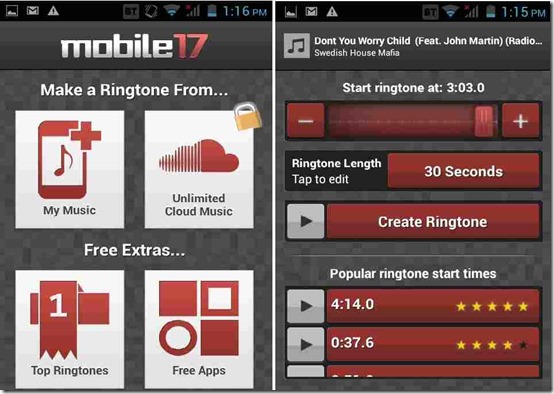 The app also offers you a Soundcloud link, which is paid.

Enough with the good words about the app, now I would discuss the part I did not like about the app. The first annoying thing that I came across were the ads. You would find so many ads after installing the app that it would become annoying. The app has a feature called top ringtones, which when clicked shows you a list of ringtones made out of songs. Tap on it, it opens to a site which is not free. Either the developer does not understands the meaning of the term “Free” or he has done this willingly to annoy us.

The ads disappear when you pay for the app, the Soundcloud feature is unlocked when you u pay for the app. The ringtone link that is provided directs you to a paid site. But if you just want to make your own ringtone, then you can do that easily from within this app.

In case you find these negatives too much to handle, then you can try this another free Ringtone Maker App for Android.

How to Make Ringtone From Mobile17  free Ringtone Maker

Step 1: Launch the app on your phone. You will see four options in the first window. Tap on the “My Music” option. 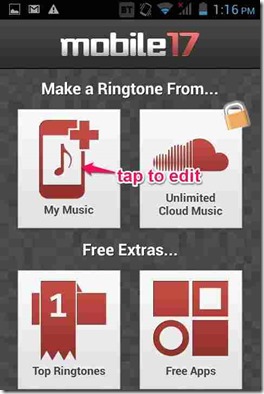 Step 2: The option opens up the phone library and shows you the songs that you have in your phone. Tap on any (starts playing) and then tap on the “OK” option that you see at the bottom. 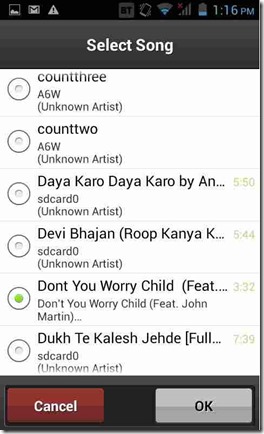 Step 3: Once you have selected a song, this free ringtone maker tries to identify that song and shows you options from its library that match your song. In case you find a song in that, you can click on that, or simply scroll down and select on “No Matching Ringtones”. In either case, it will open the song in its music editor. 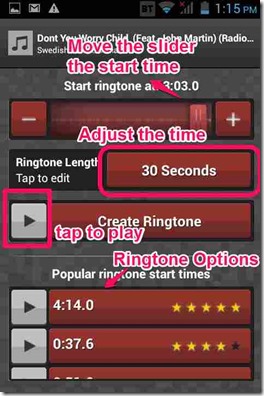 In case you were not able to find a match and chose “No Matching Ringtones”, then it won’t show any popular ringtones. The screen will be similar to the one above, without the popular ringtones. You can manually adjust slider to set the start time for the ringtone.

Step 5: If you wish to play the song then just tap the play button appearing at the “Create Ringtone” bar. Select the “Ringtone Length” by tapping on the option and then selecting the time ranging from 1 seconds to 60 seconds. Adjust the ringtone length and start time from the slider and tap on the “Create Ringtone” option.

Step 5: Now you can choose to save the edited audio as Ringtone, or Notification or as an Alarm from here only. Or you can just tap on “Not Now” option to save it on your phone. 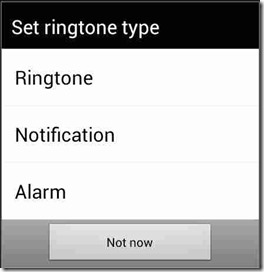 Apart from this, every other feature that you see in the app is paid.

The app is quite awesome and annoying at the same time. I really like the ease with which it lets me create ringtones, as well as shows other popular start times for the song that I select. However, the fact that almost every screen has deceiving options to upgrade, as well as most of the “free” things are actually paid makes this app quite annoying. I really hope developer has some long term view of this app and lets it become even more popular by removing these annoying options, instead of trying to make short term profits with these things.

Get Mobile17 Free Ringtone Maker from here Or Scan the QR code below.