System Tray Hider is a free software that allows users to hide their system tray in Windows. Originally, this software was just tested on Windows 7. However, according to the developer it should work on older versions of Windows too.

With this small application one will have way more space to windows. It’ll come particularly handy if you’re used to open dozens of windows at the same time but don’t like to use Windows management software like AquaSnap or GiMeSpace.

System Tray Hider could also perfectly meet the needs of those who enjoy to customize their Operating Systems by removing the system tray which is sometimes more of an annoyance.

Once you toggle it on the system tray should immediately disappear and the only thing left visible will be the clock. 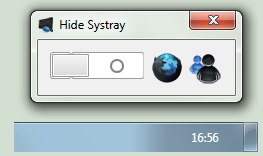 System Tray is a really interesting application whether you use it simply for aesthetics or to save space for other windows.

How To Use System Tray Hider:

Using System Tray Hider is extremely easy since it doesn’t even require an installation. After downloading the compressed file all you need to do is unzip it in a specific folder and launch the application.

In order to hide the System Tray all you need to do is use the switch to turn it on and off. The Switch should change to either “I” or “O” which indicates on and off. After you’re done doing whatever you want you can simply close the program and the system tray should be restored to its normal position.

Please note that this software was only tested on Windows 7. So if you’re using an older version of Windows bugs my appear.

This is a small handy utility designed to perform a specific task. Reminds me of Monitor Off Utility that lets you switch off laptop monitor with one click.