Idea Sandbox’s Decision Making Tool is an interesting way of how you can make decisions about what to do in a given situation. The reason why this “tool” is interesting is because it is not an application per se, but rather it’s a Excel spreadsheet. Don’t give up on this useful little decision making utility, because once you hear how it works, you might be persuaded into actually using it to make at least the less important decisions in your life. 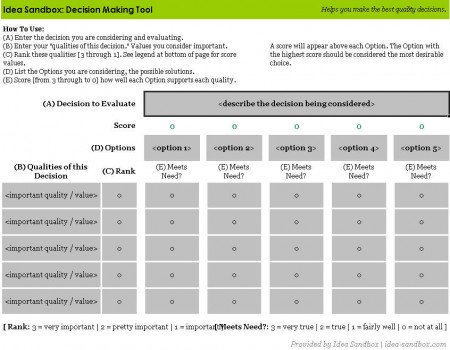 Decision Making Tool spreadsheet comes with 2 sheets, what you see on the image above is the default empty sheet which is the one that you can use in your decision making process. Everything that you need on how to use this table to make better and easier decisions is written and offered to the user right there, and it shouldn’t be too hard for people to understand how Decision Making Tool works.

How to make decisions with the help of Decision Making Tool

I mentioned that there’s 2 sheets being shipped in this spreadsheet, the first one can be seen on the image above, but it’s the second one which is more interesting. Second spreadsheet is an example spreadsheet that can help you to understand better how to use this tool. 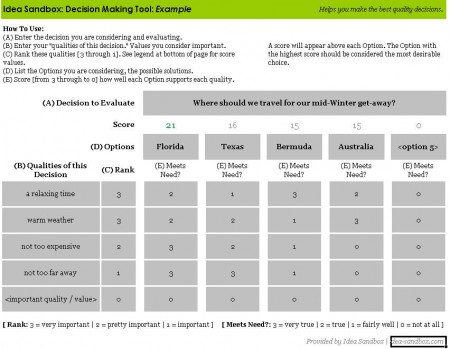 If the first sheet hasn’t been helpful, this second one will be. Everything about how you can make the decision process a little bit easier is shown with this vacation get-away location choosing example. The trick is in changing all the fields in the default template so that they reflect whatever it is that you’re making the decision about. To start making a decision, edit the following 4 fields: 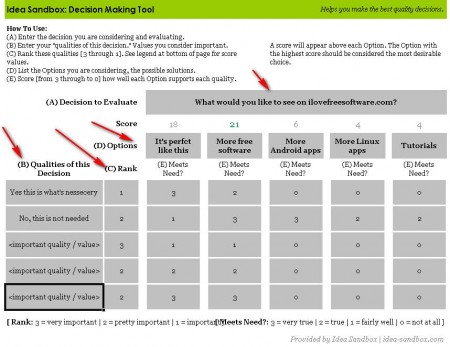 Start by witting down what kind of decision it is that you are making. Then edit the Options that you have for this decision, there are only 5 slots for options, which should be enough, if not try to cut down the number of choices that your decision has, :).

After that you need to enter what kind of Qualities the best decision has to have, you can enter up to 5 of them also. To the right from the qualities column there is another column called Rank. If you don’t fill it out, the table will not work. With Rank you determine which one of the qualities is more important, because let’s face it, when we are making decisions there are factors which are less important and others which are more important and with Rank you can determine which is which. That’s it when it comes to configuring your decision table, all that’s left now is to start entering values for each of the options.

Enter numbers from 1 to 3, and after everything is filled up, the number at the top, where it says Score will change and you will know which option it is that you like the most. That’s basically it, your decision is made, and all thanks to this little Idea Sandbox’s Decision Making Tool, or should I say sheet, try it, it works under Linux also with OpenOffice or LibreOffice.