Zombie Shooter is an free survival game online; to play on your Chrome browser. Shoot zombies before they kill you, or else they will zombify the remaining population also.

Update: (July 16, 2013) The app has been removed from Chrome Web Store. You can play an alternate version of Zombie Shooter For PC or Zombie game for iPad.

Zombies are fictional creatures, believed to be dead persons back to life; who crave to kill others and turn others into zombies. Install this Chrome app and you can play this zombie shooting surviving game online for free. Survive the waves of Zombies, collect ammo, and health to make high scores. 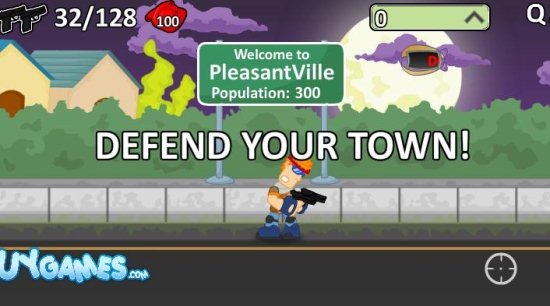 In Zombie Shooter you have to protect your city PleasantVille from Zombies. You stand at the border of the city and you are an one man army. The only help you are going to get is: ammo and health. You have to kill the zombies before they enter your city. Once if they enter your city, they will kill other people and they will also turn into zombies and attack you.

As soon as the game launches, you will be standing near the entrance board of your city. By default you have four guns with you; but you will get ammo as you progress to higher waves. Initially you are given a gun and some ammo in it and your health level is 100%. Once the game starts, you see that zombies come walking and crawling towards you; later you will see weird creatures also attacking you. You can see a flying capsule, which periodically drops ammo and health. Make sure you walk till the graveyard (which is located at the end of the street), and collect the upgrades. Shoot the zombies and kill them till they die, don’t let them cross the city board. Once if they cross the border, they will turn the remaining population to zombies and they will start attacking you. 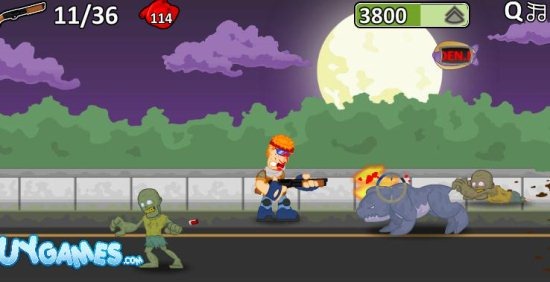 On the game screen, you can see the ammo in your gun and health percentage on the top left. Your gun point is shown with a cross hair symbol; so always take head shots to kill the zombies faster. Once you start collecting health kits, your health can increase to any number. But if zombies pass through you, they suck your blood and enter the city. But once zombies turn others into zombies, you will be attacked from both sides. So, be careful to not let your city people also attack you. Just survive the waves of zombies, each wave gets difficult gradually as you progress. This game’s ultimate aim is to make high scores. You will get points by killing and collecting upgrades.

The controls of Zombie Shooter are:

Here is a video of the shooting and zombies attack gameplay for you.

Zombie Shooter is a fun game to play and will keep you competing for high scores. The sound effects are fun.