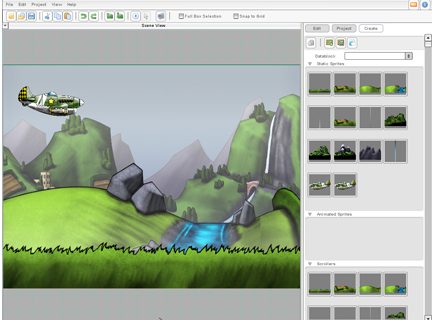 Basically, this software is integrated development of environment (IDE) that supports game development programs. It includes extensive set of class of libraries which are dedicated to game development which promote max use of code within the platform. Thus the games developed with this software are actually for runtime basis and can be run on any machine which supports XNA framework with or without any modification.

The framework used in the software is having universal acceptance and is optimized for gaming and resulting into managed execution environment. The Microsoft XNA Game Studio is designed with XNA framework so that low level technological details can be looked upon by this framework like taking care of game coding to some extent and taking care of different platforms when games are plugged from one platform to another. Some other game creation software that you can also try are: Free XBox Game creator, game creator for kids, and Construct Free Game Creator.

Microsoft XNA Game Studio is compatible with Windows 7, Vista and XP. You can create video games in any machine that supports XNA framework and requires graphic cards of Shader Model 1.1 and in some cases Shader Model 2.0 which is used by some samples and starter kit in the package or else DirectX 9.0c. in order to create video games for Xbox consoles, connect your hard drive to Xbox and do the rest.