Alice is a free 3D programming environment designed primarily for use as an educational tool for young people to be able to produce high quality animations without undergoing complex training. The simplicity of the software is its strength, enabling it for use by almost anyone who is at least competent with a computer.

Most of the actual usage of this free software revolves around dropping tiles that represent actions onto the active panel. That works a lot like another programming language for kids that we reviewed earlier: Scratch. 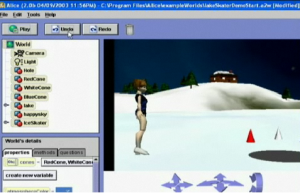 The basic premise is for youngsters to learn basic methods of programming using a very simple interface. They populate a virtual environment with sprites and actions, then creating a program to bring this environment to life in a style similar to Java or C++.

The simple drag and drop system that it possesses makes it absolutely perfect for the more inexperienced user of computer programs in general and especially for those who have not used animation software before. Another easy to use software for kids is Kodu. Kodu creates games for Xbox 360.

Usefully, a preview mode is built into the software which enables you to view your animation throughout the process in order to notice any errors or discrepancies between what you imagined and what you can see. This is also useful for those testing out new features and wanting to see what the results of adding a particular effect are. Only helping to cement the learning process that users go through, this is an immensely clever addition to the free 3D programming environment.

Some other free tools for kids include Kidzui, OnlineFamily, and Tux Paint.

So to conclude, Alice is a clever free 3D programming environment that is ideal for those without prior experience in animation or creative software in general. Education can never be a bad thing and neither can Alice.