Some of you might get bored of using default themes in Windows 10 and want some cool and stunning looks for your PC, then try “Mac OS X Yosemite Theme” for once. The following image shows the changed desktop after installing this theme. 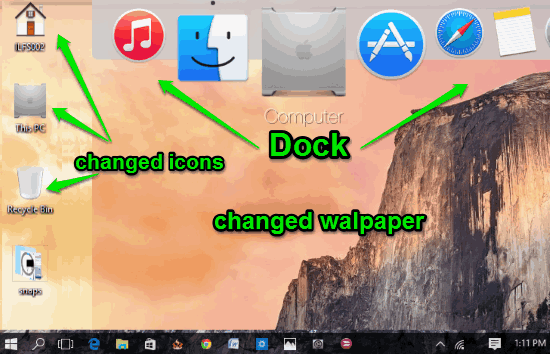 I will explain the procedure of installing this “Mac OS X Yosemite Theme” step by step and what changes it does to your Windows 10 PC below.

Note: This software will modify some system files. So, proceed at your own risk :)

How to Download and Install “Mac OS X Yosemite Theme” in Windows 10 PC:

What Changes You Will be Able to See in Windows 10 After Installing “Yosemite Transformation Pack”:

After installing this theme, it changes the appearance of your desktop and makes it look like Mac OS X desktop. It changes the folder icons and wallpaper of your desktop. You will also see the taskbar has some shadow and transparency effects after installing this theme. My favorite feature of this theme is the customizable “Dock” in the desktop. You can see the new desktop with the “Dock”, changed folder icons and wallpaper in the above screenshot.

Native Mac OS X “Dock” on the Desktop of Windows 10:

The most interesting thing that “Mac OS X Yosemite Theme” provides is the “Dock”. The native Mac OS X “Dock” feature provides  easy navigation of files and folders. Align the dock on top, bottom, right, or left side on the screen and also add different files, folders, icons, etc. The dock is totally customizable, which you can hide when not required by selecting “Auto-Hide” option. Drag and Drop different files and folders in the dock for repositioning them or else if you wish to keep any item stable in the dock then lock the item permanently on the same position. You can add multiple files and folders and browse them directly from the dock. The following screenshot shows the “Dock” with different options. 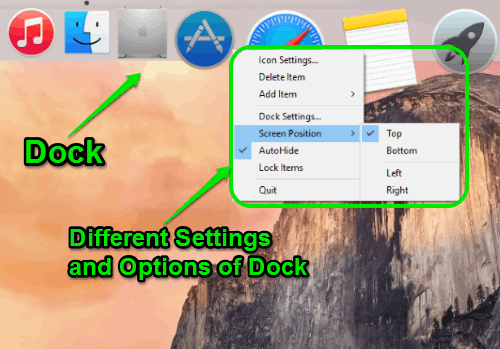 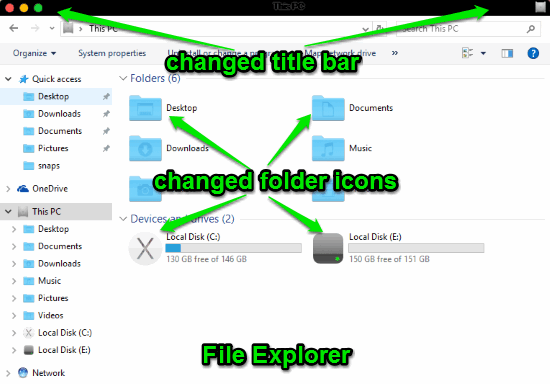 Personally, I like the appearance of File Explorer in my Windows 10 PC after installing this Mac OS X theme.

We have also reviewed Free Ubuntu Theme For Windows 10 which you might like to install in Windows 10 PC.

This Mac OS X theme for Windows 10 PC is quite stunning which makes your PC interface visually appealing. The procedure of installing “Mac OS X Yosemite Theme” in your Windows 10 PC is a bit time consuming, but the outcome is pretty cool. It changes the whole appearance of your PC’s interface into Mac OS X interface with new folder icons, Title bar, Windows button, etc. The “Dock” feature is also very useful for browsing different files and folders with ease.

Get Yosemite Transformation Pack from here.