Since Cacoo for Google Hangouts is primarily an online service that runs in your browser, there isn’t much initial configuration involved. However, make sure that you have the Hangouts plugin installed in your computer, as the service won’t work without it (If you don’t have the plugin installed, Cacoo for Google Hangouts will prompt you to install it beforehand). It is also preferable to have the latest version of the web browser that you use primarily, as older versions might pose some problems.

How To Create And Share Diagrams Over Google Hangouts?

Using Cacoo for Google Hangouts to create and share diagrams is fairly easy. The following step by step procedure explains how to do it:

Step 1: Go to Cacoo for Google Hangouts’ homepage, and click the big Red Hangout button towards the bottom of the page.

Step 2: Once you do that, you’ll be redirected to your Google Account sign-in page (It goes without saying that you need to have a standard Google or Google Apps account to use Cacoo). Once you sign-in, you’ll need to authorize Cacoo to access your Google account. After that, the service will automatically create a Hangout, and an invitation pane will pop-up, allowing you to invite others to your Cacoo Hangout. When this is done, Cacoo for Google Hangouts will launch. Here’s how it looks like: 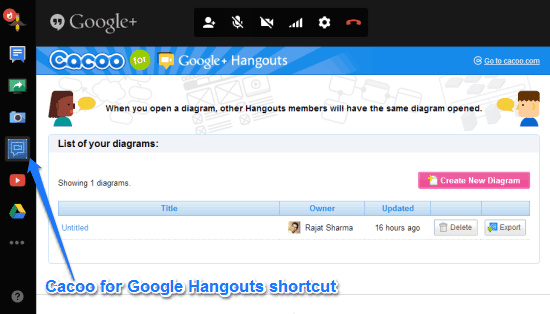 As illustrated by the above screenshot, Cacoo for Google Hangouts essentially looks like an interactive web-application embedded inside a Hangout (and that’s kinda what it is!). It primarily consists of the list of the Cacoo diagrams created by you, as well as a button to create a new one. Apart from that, it just consists of the standard Google Hangouts management buttons (turn camera on/off, end call etc.), as well as some standard sharing buttons on the left sidebar, with an extra shortcut for accessing Cacoo for Google Hangouts.

Step 3: To create a diagram from within the active Hangout using Cacoo, simply click the Create New Diagram button. A wizard lets you select the template for creating a diagram. You can choose from a variety of formats, ranging from organizational flowcharts to database diagrams. Select the one that you want, to open it up in the editor. Check out the screenshot below: 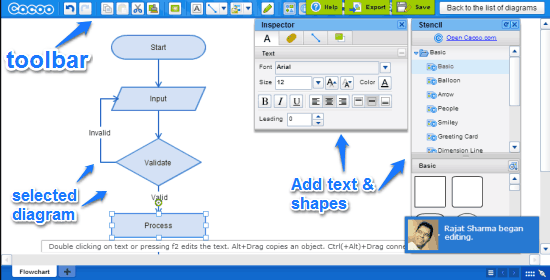 The Cacoo diagram editor features quite a busy, but easy to use interface. A white pane consists of the selected diagram template (a flowchart, in the above example). Each individual element of the template diagram can be moved by dragging and dropping. To add text, simply double click on an element and type away. You can also add things like lines, basic shapes etc., as well as customize the added text. An icon based editing toolbar up top lets you perform standard editing operations (cut, copy, paste etc.) and insert images directly from your computer to your diagram. 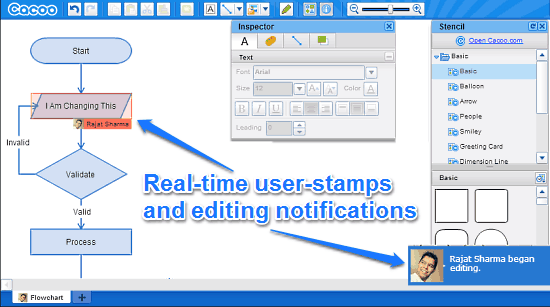 Step 5: That’s it. Once you (and other collaborators) have finished working on the diagram, you can save it. You can also export it as a PNG image after connecting to your Cacoo account. It’s that simple.

Cacoo For Google Hangouts is an amazing web based service that lets you create and share a large variety of diagrams with others in a simple and easy way. The ability to collaborate upon diagrams while connected to Hangouts is amazing. Then there’s the real-time activity indicators and pop-up notifications, which make it even more awesome. Essentially, Cacoo for Google Hangouts turns your computer into a virtual collaborative conference tool. Do give it a try, you’ll love it.

Get Cacoo For Google Hangouts Here.