Here is a list of 5 free apps to Automatically Backup Videos from Android to online Cloud Accounts. While some of these apps will automatically backup your Videos only, others will backup your Photos as well. These apps won’t require you to manually upload every video to your Online Accounts and will instead perform a backup automatically in the background, as and when your Internet Connection allows it. These apps also have the option to backup your Videos only when a WiFi connection is available, that is, to avoid any data usage costs that you might have had to bear otherwise. 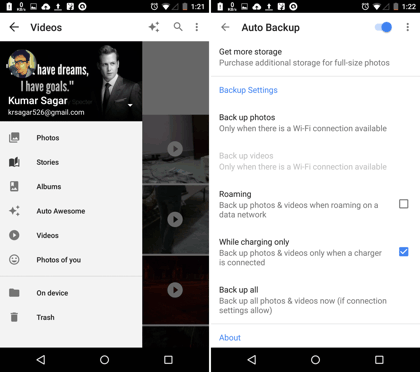 Google+ Photos is the stock app which comes along with the official Google+ app. Google+ Photos allows you to view your Camera photos and Videos, and you can use it to upload your Photos and Videos to your Google Account. Google also provides you with 15 GB of free online storage which is shared between your Drive and Photos service. The Photos App will only backup your Videos when you are connected to a WiFi network. 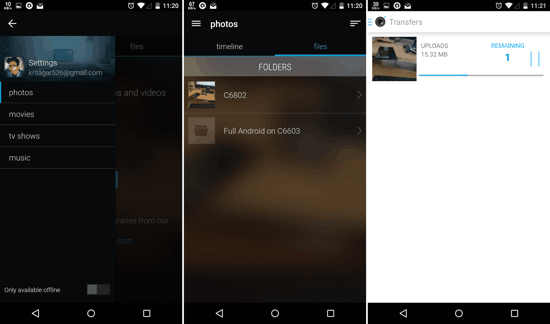 StreamNation for Android isn’t really an app which just wants to replace your Cloud Accounts. Rather, it wants to replace your Media Storage completely! StreamNation allows you to make all your media accessible from anywhere by uploading everything online — be it Photos, Videos, or Music. No points for guessing that the main objective of StreamNation is to be your Media Hub. But StreamNation also has a Camera Upload extension named Shutter for Android, which you will be automatically directed to once you download StreamNation. Now, Shutter has a pretty neat feature tucked in — it has a built-in Camera interface which can be used to snap a photo, which will be uploaded instantly to your StreamNation Account. Not just that, once the Photo is uploaded, the local copy will automatically be deleted! And to get you rolling, StreamNation provides you with 20 GB of free online Storage. 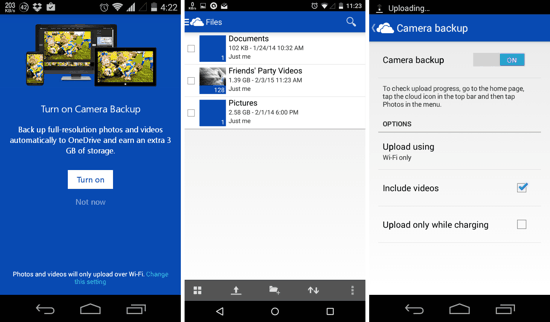 OneDrive is a great option if you want to upload your Videos and Images, all at one place in the Cloud. Microsoft gives you 18 GB (15 GB by default, and an additional 3 GB which is credited on enabling Camera Upload from the Android app) of free storage which is probably more than enough to get started. Also, whenever OneDrive uploads any Videos (or Photos) to the cloud, it shows a notification for ongoing uploads with the exact number of photos or videos left for upload. And you can access your uploaded Videos right on your Windows PC quite conveniently. 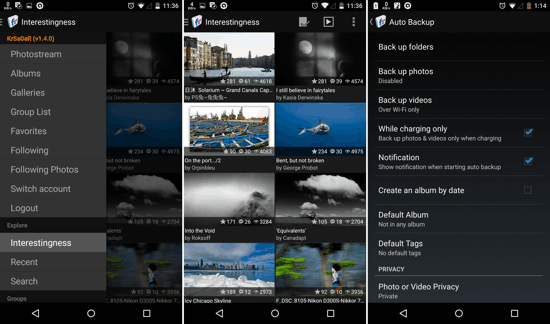 Flickr Bot is a third-party app alternative for Flickr. While the official Flickr App does provide you the option to upload your Photos Automatically, it does not create a backup of your videos. And that’s exactly where Flickr Bot comes in the picture. Flickr Bot prides itself in the fact that it has even lesser permission settings than the official Flickr App. But for me, it has the upper hand because it can Automatically Backup your Videos to your Flickr Account. The interface is also easy to use, so you can definitely give it a try. And did I mention that Flickr gives you 1 TB (1000 GB, to be precise) of Cloud Storage space for free? 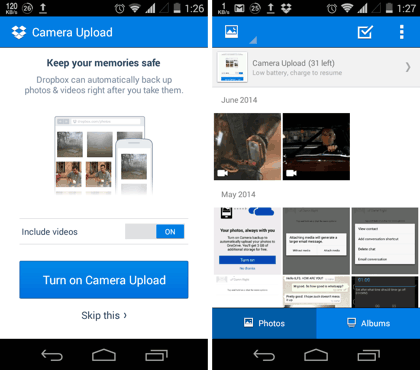 DropBox for Android is another Online Cloud Storage Service which allows you to Automatically Backup Videos from Android devices. The Official app has the option and you will be asked to enable it the moment you sign in to the app for the first time. But do remember that you only get 3 GB free space with your Dropbox Account, so use wisely! And, Dropbox also has a dedicated app named Carousel for Android which is specifically meant for Photos and Videos.

Yep, you have finally reached the end of this list of 5 free Apps to Automatically Backup Videos from Android. Were you just looking for Apps which could help you upload only Photos? Just head over to this Article and check them out.