Here’s an article dedicated to the 5 Best Emoji Keyboards for Android. These keyboards allow you to add emojis to your texts on the internet or instant messages or virtually any text. While the inclusion of emojis is a significant feature of these keyboards, there are other noticeable enhancements as well. While Swipe typing is something you can expect; these keyboards have numerous themes available for download, and are resizeable as well! And don’t fret just because you can’t remember the key combination for that smiley you want to use, just scroll down and learn how to use emojis instead! 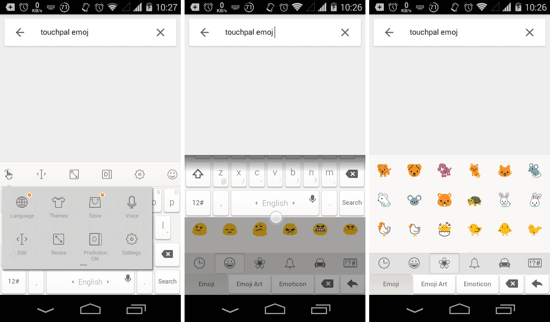 TouchPal -Emoji Keyboard&Theme is probably the best emoji keyboard for Android. In fact, TouchPal isn’t just good because of the emoji support, it is a great standalone keyboard in its own right. Touchpal has numerous free themes, and lets you tweak several settings. The emojis implementation, though, is my personal favorite. If you want to enter an emoji in any text, all you need to do is swipe up from the bottom of the keyboard and the emojis will be revealed from underneath. Swipe down after that and you will be back to the qwerty keyboard! TouchPal also has a great prediction mechanism which even predicts emoticon(s) related to any word that you type. Go ahead, give it a try! 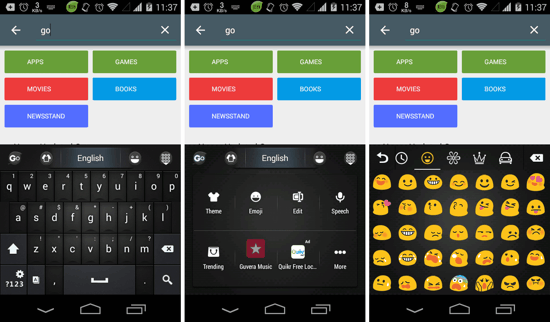 Go Keyboard for Android is another great option, and not too different from TouchPal in terms of features. It lets you add multiple languages, and choose from a variety of themes. The emojis are easily accessible via the emoji icon on top of the keyboard. The keyboard is responsive, and the emojis in fact, are an addition rather than the only focus of this app. It deserves its place in this list of the best emoji keyboards for Android, and is available for free from the Play Store. 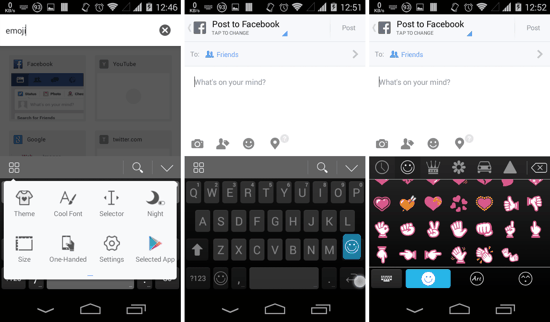 Emoji Keyboard Pro touts the emoji support at its main feature, as is clear from the name itself. The keyboard has most of the features that you expect from any of the popular names. You can select your own theme, change the font, and adjust the size of the keyboard as per your liking. Tapping on the 4-square icon on the top of the keyboard will reveal all the extra features along with the emoji icon. It is one of the best emoji keyboards for Android, and has numerous emojis to choose from. One cool feature that I liked in this keyboard is the Search key which lets you search directly from anywhere on your Android. 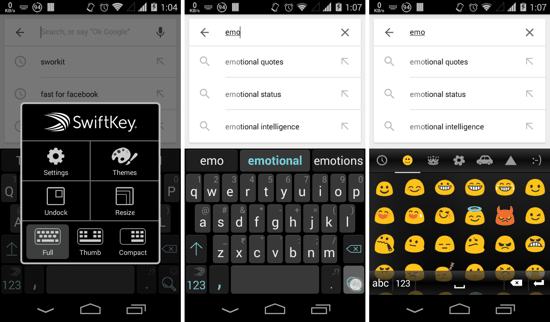 Swiftkey is one the most acclaimed standalone, and best emoji keyboards for Android. And well, a name which is so popular, does obviously have to include every popular feature out there! Emojis, for example, are now part of our Internet lives, and Swiftkey delivers them in as convenient a way as possible. To open emojis, all you need to do is touch-n-hold on the dynamic button on bottom right (this button changes to a search or done button depending on the text field, but emojis can be called upon regardless of that). The emojis are presented to you in a vertically scrollable layout, and are easy to browse around. 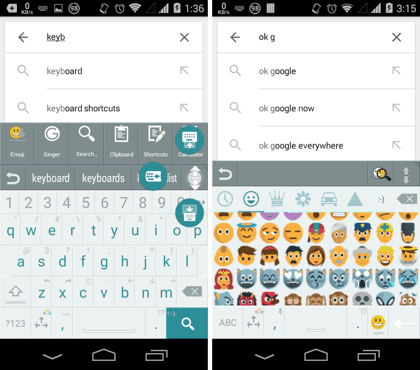 The last on this list is ai.type keyboard for Android. This keyboard too has its own set of unique features. This keyboard has an interface which might look complicated at first, but is not too hard getting used to. The resize button is always present on the top right of the keyboard, and allows you to resize the keyboard freely in an intuitive way. Emojis can be accessed by tapping on the menu button on top left, and then tapping the emoji icon.

That’s all for now folks. I hope this list of 5 Best Emoji Keyboards for Android was helpful for you. Want to suggest any other keyboard that wasn’t featured here? Go ahead, fire-off your comments!