Here’s a list of 5 hardware specification analyzer apps for Android which you can use to find out information about hardware specifications of Android. Many people use their device without really knowing what’s “under the hood”. Even though knowing hardware specs of your Android device aren’t something that you would normally need to know, it does come in handy when deciding if that game or app is worth downloading or just when you’re bragging in front of friends, or, before even deciding which phone to buy.

Hardware Detection is a an informative hardware specification analyzer app for Android where you’re presented with bits and pieces of information on just about everything about the Android system and hardware that you’re device is running. 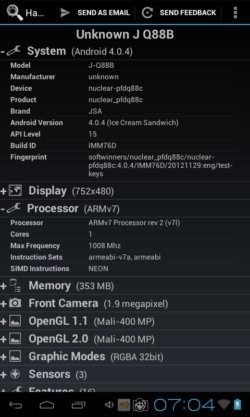 As you can see from the screenshot above, all the important information is sorted in groups starting with System and ending with Sensors. In between the two you’ll find detailed information about the processor, memory, camera, graphics, and more. App is very lightweight, doesn’t require any kind of special permissions, other than hardware access (there are no ads) and it has “send via email” option which lets you send hardware reports via email.

CPU Spec is an app for viewing hardware info of a particular component, can you guess which one? Yep, it’s the CPU. 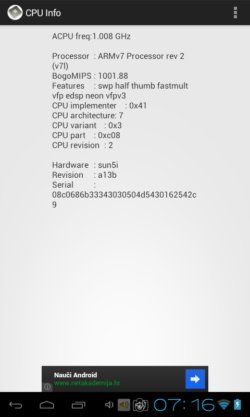 CPU Spec retrieves information on pretty much everything that you’ll ever gonna need about your Android phone’s central processing unit, CPU type, model, frequency of course, everything down to the manufacturer, revision number and even the serial number that’s given by the manufacturer. App is very simple, with just one refresh button which you can access in the top right corner.

The next app that we’re gonna be talking about is also called CPU, CPU-Z to be more precise, only this one is slightly more famous. 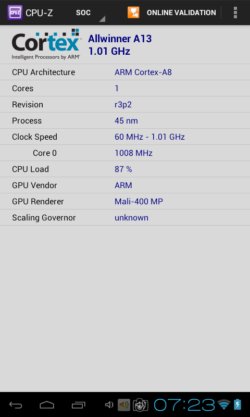 We’ve all used CPU-Z on Windows and if you haven’t you can still download a version of this hardware information analyzer app for the desktop. Android app works pretty much the same, you’ll get info on everything, not just the CPU, graphics, memory, storage, battery, sensor data, everything’s reported.

Get CPU-Z. You can read its detailed review here.

CPU / RAM / DEVICE Identifier looks really good, as you can see from the screenshot down below. 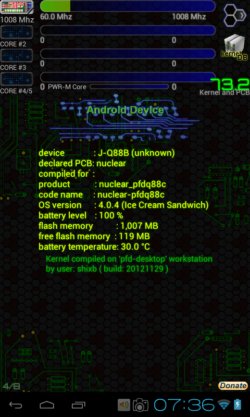 To access all the hardware information of Android that the app has to offer, you’re gonna have to swipe left/right to switch between pages. Notice in the bottom left corner that there’re page numbers for different parts of system info that’s available. It’s not just CPU and RAM info that’s available, you get the whole system info reported back, everything.

CPU Memory Monitor will report back CPU and memory stats of your Android device, not just the total amount, but also the amount that’s used by various applications. 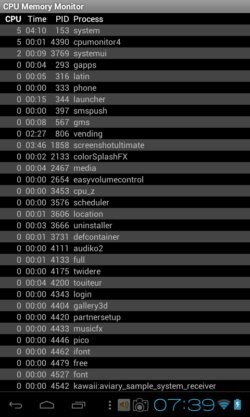 You can see the app in action in the image above. Scroll through the list of apps to see the complete usage and all the available CPU/memory that your device has. Like all the other apps until now, this one also has very small system access requirements, practically none.

As far as functionality goes we were impressed the most with CPU / RAM / DEVICE Identifier and CPU-Z, but all the other hardware specification apps of Android that we mentioned are also great for finding out hardware specification of your Android powered device. Do you have suggestions? Let me know in comments down below.