Flickr2Frame is a small and handy utility which can be used to scour the large collection of images that is available on Flickr and automatically populate your USB digital image frames with pics that were found online. Even though it doesn’t seem like that at first, the creators of this automatic image frame downloader had ease of use in mind when they were creating it, which can be seen from the rather simplistic interface that Flickr2Frame sports. 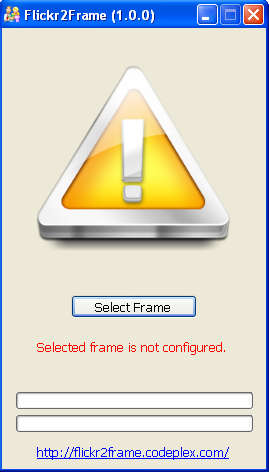 Depending on what kind of USB image frame you have, it will probably be detected by the program automatically. In our situation that was not the case, and that’s why we see a warning on the default program image above where we are asked to Select a Frame. Even if the Frame is recognized, you’re gonna have to enter options and enter Flickr information, so in any case the following step cannot be avoided.

Configuration menu cannot be accessed directly from the main app, although you will be offered to open up the Config window once that the error that you can see above appears. If you miss the chance to open up the config menu it can be opened by clicking on the ConfigFrame.exe file which can be found in the application folder, the one that you’ve downloaded from the web. After you run the config, you should see the following window: 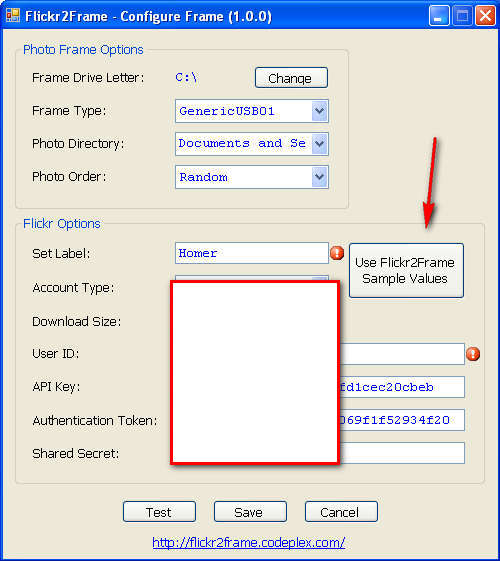 There are two portions of it that you have to fill out. First part would be Frame configuration, if it wasn’t recognized immediately. The Frame Type selection would be the most important field, because that’s where you select what kind of USB interface the program will use to communicate with the Frame. Generic setting should work on majority of devices, so try that first before moving to others which are offered. Another important option would be to choose the Photo Directory, directory where your USB Frame stores images it uses.

Second part of the configuration relates to Flickr, it’s where you can choose what kind of account will be used to connect to this image sharing website. You can even access your own images by entering the information about your own account. Make sure to fill out all the fields with their proper information, like API key, authentication tokens and so on.

Those who either do not have a Flickr account or are just not willing to share it with Flickr2Frame can click on the Use Flicr2Frame Sample Value button. After doing that, the default information provided by the program itself are filled out which makes things a lot easier. 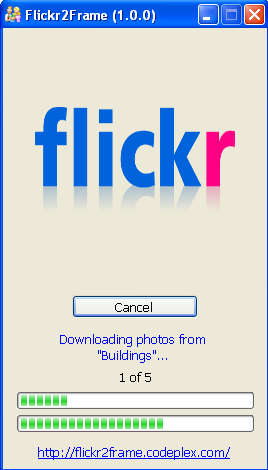 Once that you are finished changing all the options, and after clicking on the Save button, you will be warned that the selected image directory on the Frame will be deleted, and after you click Yes, Flickr2Frame will start downloading images and populating it with images that it found on Flickr. You can then start enjoying images on your USB digital image frame, and if you want new ones just rerun Flickr2Frame. Simple and easy, try it, it’s free.