Wordz is a free lightweight portable text editor which you can install on a flash drive and use on the go. It’s designed as a Office Word alternative, and it’s not very far from being exactly that. You get all the basic tools and features that you’d expect from a text editor editor, spell checker with support for multiple language by default, text formating, images and various different object can be inserted and so on. 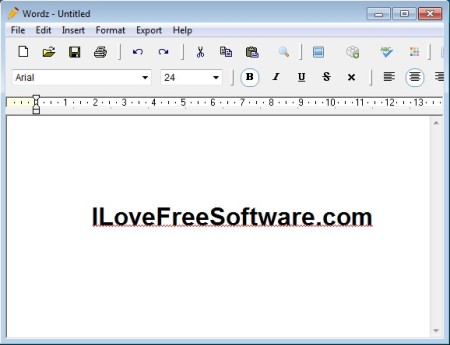 Screenshot above shows us the interface of this free portable text editor. Interface of course doesn’t anywhere near the kind of complexity that’s available in Word, but then again Word isn’t less than 3MB in size, which is the case with Wordz. Two row toolbar area can be seen at the top of the interface, below the standard menu in the top left corner of the window. The remaining empty area down below is reserved for documents. Key features of Wordz are:

Even though we mentioned that this is a Word alternative, as you probably noticed from the features list above, there’s no support for DOC or DOCX documents. Wordz can’t handle Word documents directly, but it can be used when you need to type up a paper for school, and you don’t have Office installed, since let’s face it, it is a bit too pricey for some people. Let’s see this free and lightweight text editor in action.

As soon as you start this free text editor, empty document should be waiting for you down below. The only thing that you need to do now is start typing. Text formating toolbar is the bottom one of the two that can be seen at the top. 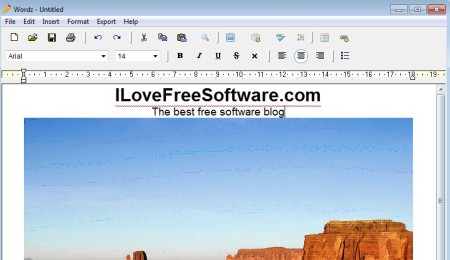 Size of the font and the font itself can be easily changed, text can be underlined, centered, pulled to the left or right, and everything in between. Photos can also be inserted, select Insert >> Image to do that. They should be resized beforehand, because image resizing isn’t that good. Once that you’re finished editing the documents, you can either save it as RTF or TXT by selecting File >> Save, or the created document can be exported as PDF, by selecting Export from the top menu.

There’s a lot of text editors out there, but none of them offer the kind of functionality and small resource usage that Wordz has. On top of all that this free text editor is also portable. If you’re not very demanding, for some light document editing, this is the tool for you. Free download.