Here’s a list of 4 read later extensions for Chrome which can be used to save web pages so that they can be read later, when you find the time, for example. With the extensions from the list down below, entire web pages can be saved, favorited and even archived, so that even if the website goes down, you can still have access to the info important to you later on.

Let’s see just what kind of read later extensions for Chrome can be found in the Chrome Webstore. 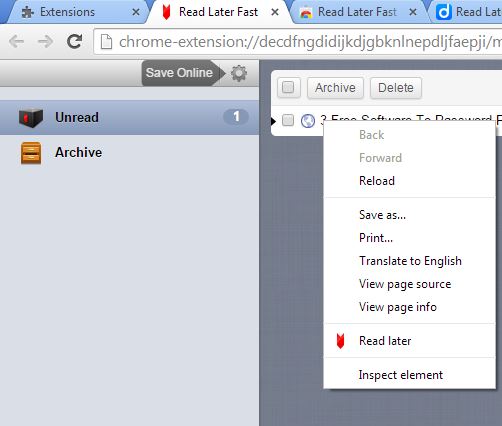 Read Later Fast will download and save the entire web page, right down to the last detail, including images, so that it can be accessed later on even when you’re not connected to the internet.

Pages are saved to the extension cache, and they can be accessed by opening up extension settings and selecting the Archive option from the left sidebar. It’s possible to sync saved web pages online, but you will need to register an account to do that. To save a web page, just right click and select the Read Later option. 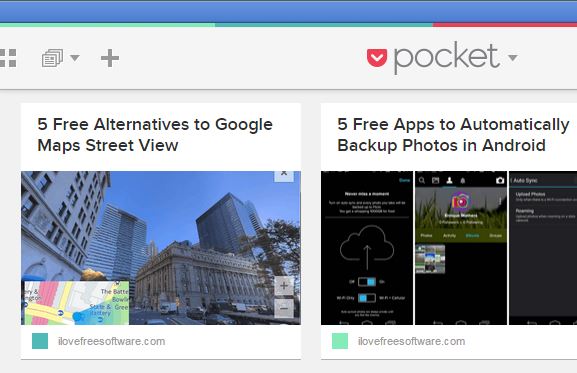 Pocket works entirely online, it saves websites to an online repository that you get by registering a free account on the Pocket website.

Web pages that you’d like to read later have to be either manually  sxzsaved to the Pocket app (copy-paste the URL to the Pocker dashboard) or you can save them by clicking on the top right corner Pocket icon. Each web page that gets saved to be read later is going to be formatted (menus, sidebar, banners, ads, etc. will all get removed).

Also, have a look at InstaPaper: Free Online Read It Later Application. 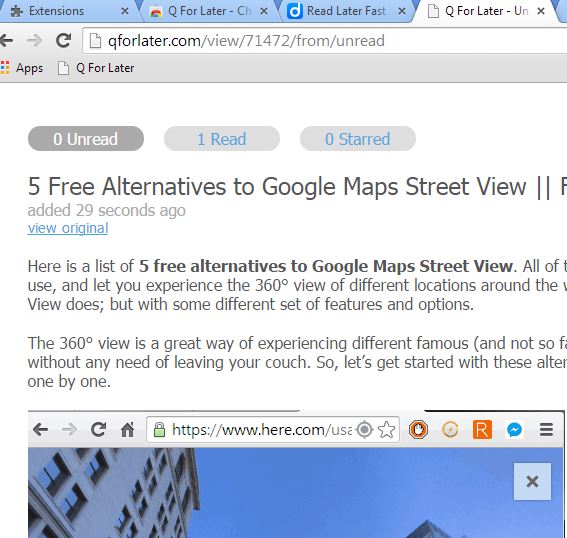 Q For Later adds a bookmarking button to the bookmarks toolbar of Chrome for quickly saving websites to the QForLater website, your profile there. You have to add it yourself actually, by dragging and dropping the bookmark icon to the toolbar.

Click on the bookmark from the toolbar takes you to the QForLater website, where the web page that you had open is going to automatically be added to the QForLater read later archive. Web pages are going to be formatted and all the unnecessary bits removed, only text and images will remain.

Get Q For Later. 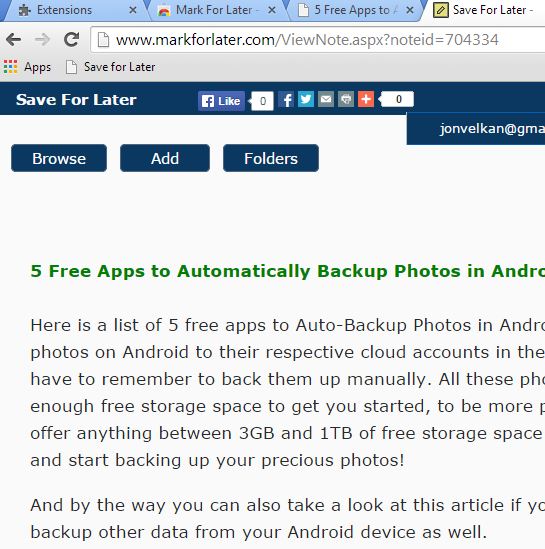 You will need to register an account with the website, and after that you save web pages by clicking on the bookmark icon. Saved web pages are formatted and only text and images get saved, just like with all the previous read later extensions that I covered.

Get Mark For Later.

Also, have a look at Free Online Service To Save Webpages to Read Later: Framabag.

I kinda like Read Later Fast, but only because it lets you save web pages to both the offline cache, and optionally if you want to the website, so that saved web pages can also be accessed from other devices. If saving web pages offline isn’t a requirement for you, then all 4 read later extensions from the list above are equally good. Let me know which one you thought was the best in comments down below.