Here’s a list of 5 radio player software for Windows 10 which you can use to enjoy online radio streams on Windows 10. Applications from the list down below are either music players with pre-bundled radio stations that you can start listening right away. Others are entirely dedicated online radio players, that play noting but online radio. Listening to radio is a great way how to discover new music, singers and bands that you’d like. 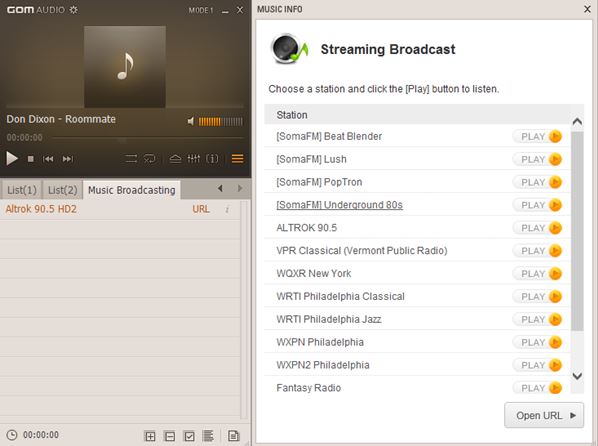 GOM Audio is not a radio player software per se. It can also play local music, from the hard drive. The reason why I’m including it on this list is because of the radio stations that it comes bundled with. GOM Audio also lets you add streams of your own to playlists.

Streams that come bundled with the application include stations from Soma.fm, WRTI Philadelphia, WXPN Philadelphia and several others. They cover a wide range of musical genres like rock, jazz, downtempo, pop, alternative rock, metal, etc. Music player portion of the application has support for all the common audio formats like MP3, FLAC, OGG, WAV, WMA, AAC and their respective online radio streams. Interface looks modern and polished up, application has low resource usage, supports theming, playlists, ID3 tags. Be careful during install, because installer has toolbar promotions that it tries to sneak past the user. 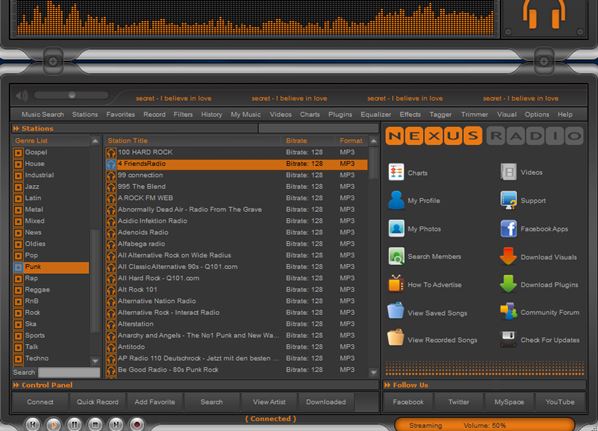 Nexus Radio is an online radio player software for Windows 10. It comes packed with over 12,0000 radio stations. They are divided up into categories based on genre. There’s close to 40 of these categories, as you can see in the left sidebar on the image above. Right next to the genre list, is the station list, which gets populated after you select a genre.

Seeing how we’re talking about a very large number of radio stations that are available, a search tool is included that helps you find what you’re looking for faster. Stream recording is supported, as are favorites, extensibility via plugins, equalizer and even local playback. Account needs to be registered with the website to use Nexus Radio and there are toolbar promos during installation so be careful. 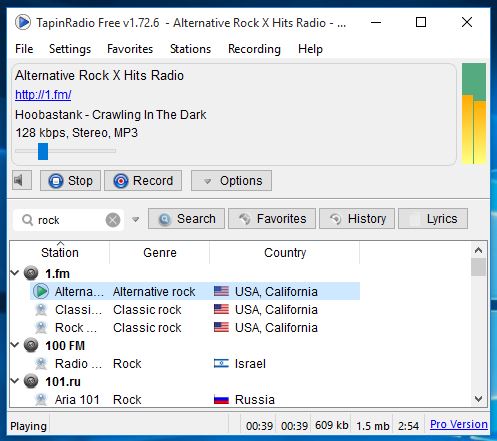 Update (22nd Sept. 2017): TapinRadio is not free anymore. In place of that, you may give a try to RadioSure. Its free version presents the list of over 30,000 radio stations, unlimited recording of radio streams, automatic stations database update, and more. You may also check its full review here.

TapinRadio is a radio player software for Windows 10 with an even more impressive selection of radio stations. When I added up all the radio stations from all the categories, I counted over 20,000 radio stations. Most of them worked, but a few were duds, which is no surprise considering how many stations there are.

Stations are categorized based on region, country, genre and network they’re from (Soma.FM, BBC). Search tool makes it easy to look up radio stations. When you come across a radio station you like it’s possible to favorite it, so it easier to find in the future. Streams you like can be recorded (MP3, WMA, AAC, OGG), and there are additional features like the equalizer with presets, sleep timer, themes, minimize to tray, etc. 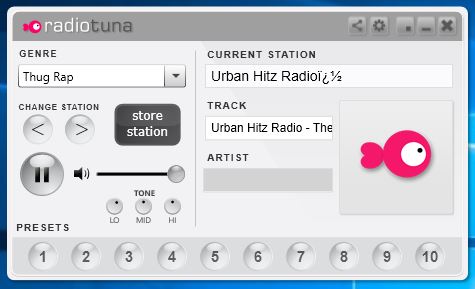 Radio Tuna is a popular online radio aggregator, and Radio Tuna Desktop is its Windows 10 client. It’s the complete opposite to the kind of radio player software that I talked about until now.

Instead of seeing lists of radio stations in the tens of thousands, here you’re just going to see a simple radio player, with a genre selector in the top left corner of the application window. Radio station starts playing as soon as you’ve selected a genre. You can flip through stations using the left/right buttons under the “Change station” section. Available genres include things like alternative rock, blues, chilled, classical, country, dance, electronica, jazz, rap, rock, etc. 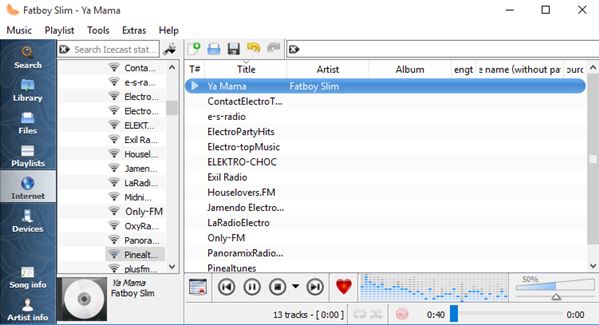 Clementine is an all-around music player software for Windows 10, Mac and Linux. It offers functionality that goes beyond the scope of radio player software. It’s the same situation like with GOM Audio, only here next to things like built-in online radios, local music playback, you can also listen to music from Google Drive, Dropbox, One Drive, Box, Amazon Cloud, SoundCloud, Spotify, Jamendo and Magnatune.

Everything internet related offered by Clementine goes under the “Internet” tab which can be accessed from the sidebar on the left. Radio stations from IceCast, JazzRadio.com, RockRadio.com, Soma.FM, RadioTunes and Digitally Imported are available. Note that for the last two you need a paid subscription in order to listen to them. All the radio stations are grouped into categories first according to network that they’re from, then according to genre. Other features include the usual like playlists, equalizer, visualizations, music cover downloads and also things you normally don’t expect to find in a music player like like CD ripping and music transcoding.

Out of 5 radio player software for Windows 10 from the list above, I personally use Clementine, so if you’re looking for a decent radio player, then go for it. It’s also worth noting that Clementine is a bit of an overkill, with lots of features and functionalities that you probably won’t be using. That’s why my second choice is TapinRadio, which offers a large number of radio stations, decent set of features but in a much simpler package. Let me know what you think in the comment section down below.