Here is a list of 5 Best World Clock Apps for Android. These apps let you keep track of the current time in different countries of the world. These world Clock apps let you add your favorite cities, and then show you the corresponding time based on their time zone. Not just that, you can add homescreen widgets for specific cities, and even set the alarm based on the time in any city worldwide. Scroll over and know more!

You should also check this article if you want offline World Clock extensions in Chrome. Want some cool homescreen Clock widgets for Android? Head over to this post. 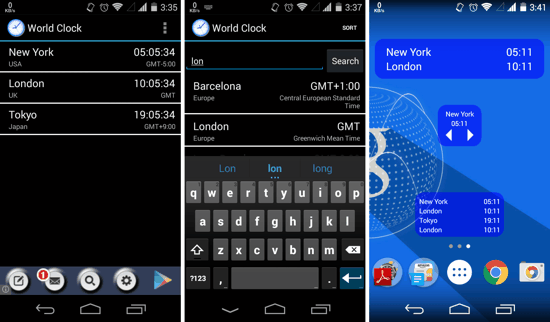 World Clock and Widget for Android is a free World Clock app which lets you add multiple Clocks for specific time zones around the world. When you launch the app, you will be shown a list of all the clocks that you have added. You can add more clocks from the options menu, and also customize the data shown with each clock. The app also has its own set of widgets which come in 3 different sizes and let you take a glance at the current time for the world cities right from your homescreen. The app is free to download, but is ad-supported and you will be shown ads on the app’s main screen itself. 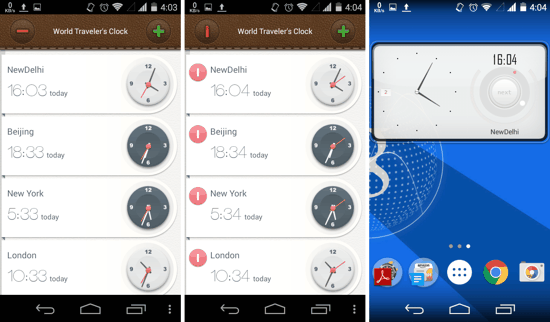 World Traveler’s Clock for Android is another World Clock app with exemplary simplicity and interface design. The main screen of the app shows you the current time for different cities around the world in an eye-pleasing list view. You can adjust the order of the cities just with a touch-n-drag. Adding cities is easy as well, and can be done just by tapping on the “+” icon on the top right. The best part about this app though, is the homescreen widget, which looks simple yet elegant.

3. Clocks around the world 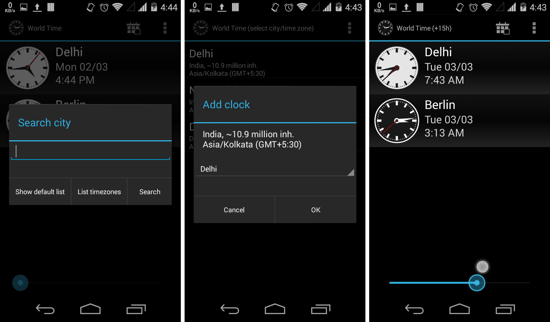 And if you just don’t care for all the nitty-gritty at all, then Clocks around the world for Android is another app you can take a look at. It offers you an interface in which nothing comes in between you and the world clocks. You can add different cities from the menu button. It also has a neat feature which lets you see the later timings in the cities you have added, just by sliding the bar at the bottom. Go ahead and give this free app a try. 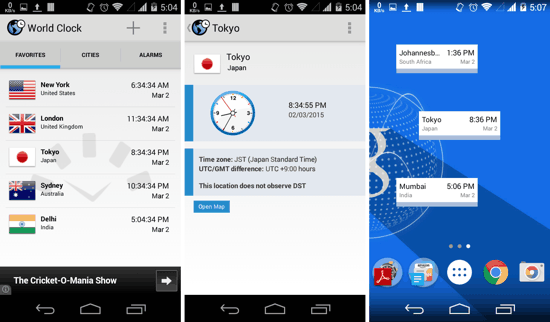 World Clock for Android is probably one of the most complete packages when it comes to, yep you got it right, knowing the time around the world. The interface of this app has a sense of polish to it and gets the work done without any fuss whatsoever. You can add your favorite cities to the main screen easily. But the most significant feature is the Alarm Clock. You can set the alarm based on the timing of any city, and the app will automatically synchronize the alarm for your current city. Pretty cool, eh? The app does have ads, but they are mostly non-intrusive. 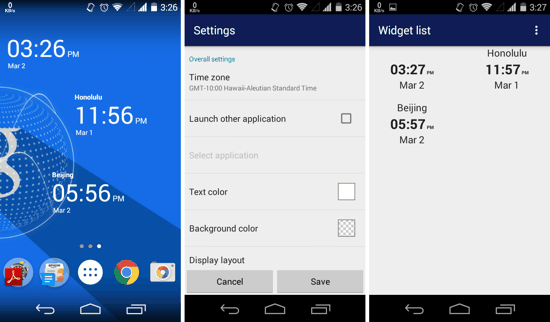 Simple Clock Widget is exactly what you must have figured out from its name — a simple World Clock Widget which shows you the time for different cities. There is no main app interface, and all you really do is add the widgets, and select different cities. You can add as many widgets as you want, and all of them are of the same size. Try it out if you are looking for some bare-bones stuff.

That’s it guys, this list of 5 Best World Clock Apps for Android is done with now. What? I missed some great app(s)? Go on! Post your comments!