SSuite System Monitor (or SSuite Office- System Monitor) is a real-time CPU monitor and RAM monitor software. That means, it can show CPU usage and RAM usage for your PC live. As soon as a new application is launched, or any other program is opened, you will be able to see changes in CPU and RAM usage instantly. This will also give you a clear idea which application/program takes more CPU usage and occupies RAM space.

Apart from monitoring CPU and RAM usage, this free software also lets you view your current IP address (both offline and online). Moreover, a power usage meter is also available on its tiny interface which could be useful especially for laptops. Unlike many other CPU monitoring software, this small utility comes with multiple valuable features.

In above screenshot, an animated Gif is visible that shows how this software monitors changes in CPU and RAM usage.

How To Use This Real-Time CPU Monitor and RAM monitor software?

Go to this System Monitor software homepage using the link placed at the end of this review. On its homepage, download its zip file which is just 320 KB. It is one of the lightweight software that falls in this category. After downloading the zip file, you have to extract it and grab its portable application file.

Execute the application file and its tiny interface will be in front of you. It provides a transparent interface and you can drag n drop it to any position on your desktop screen. As soon as its interface is opened, it will start its work to monitor CPU usage and RAM usage. CPU and RAM usage is monitored in percentage. Three different color bars will be visible to you for RAM usage, CPU usage, and Page File Load (PFL). 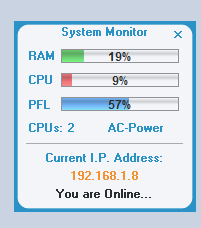 It will also automatically detect whether you are using single core CPU, dual core, or some other. At the bottom part of its interface, you can also see your IP address in offline/online mode.

SSuite System comes with a very tiny interface but successfully monitor the tasks for which it is meant for. It can be very handy when you have to detect which application requires more CPU and RAM usage, because as soon as any application is launched, RAM usage and CPU usage value is changed in real-time.

We have also covered 5 freeware to monitor RAM usage in real-time.