Video Audio Sync Fixer is a free audio sync fixer for Windows which you can use in order to fix audio sync problems of video files. All the common video formats are supported. Audio sync problems in this case would, for example, be when audio from a video file is playing either a bit too late or a bit too soon. This can sometimes happen when you’re converting videos.

Interface of Video Audio Sync Fixer can be seen on the image down below. It’s very simple without a lot of complicated menus. Three buttons is all that you get. The one in the top left corner, is of course for loading up the video files who’s audio you’d like to sync. 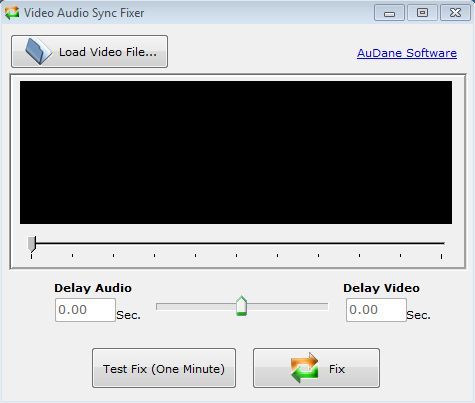 All the black area down below is of course reserved for the video preview box. This is where you can preview how the videos that you’re working on will sound after the audio adjustment has been made using the slider that’s available a little bit further down below. Remaining two buttons all the way at the bottom are for playing a 1 minute preview of the audio sync fix, and if everything goes well, for applying the audio sync fix to the entire video.

Video conversion is the most common situation where you might end up with a video that’s gonna have a shifted audio track. Recording can also cause similar problems. In these types of situations, Video Audio Sync Fixer can help you out a lot. Here’s a few pointers to help you get started.

How to fix audio sync with Video Audio Sync Fixer:

The first thing that you need to do is load up the video file who’s audio you’d like to re-sync. Selected video is gonna be loaded into the video preview box down below. 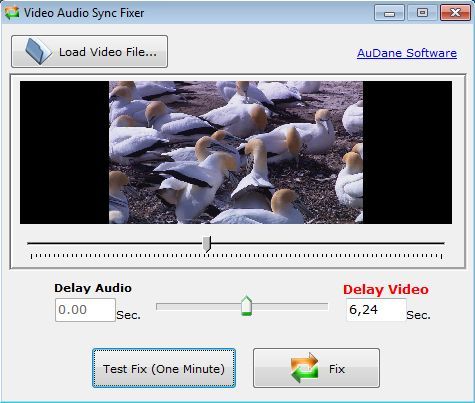 Once that you have it loaded there, you’re gonna have to use the slider at the bottom to either delay video or to delay audio, depending on what exactly is the problem with the audio. Test Fix button will “fix” 1 minute of the video so that you can see if everything’s OK. When you’re done, click the Fix button and your video is gonna be synced.

Video Audio Sync Fixer is a great way how you can salvage videos that have been damaged during either conversions or when you recorded them using TV cards. Older computers are known for causing a lot of problems when processing videos and if you need to fix audio sync, then this is just the thing you need.