Here’s a list of 5 video rotate software for Windows 10 which you can use to rotate videos on your Windows 10 powered devices. Rotating videos with the software from the list down is very easy. All it takes is a few mouse clicks. This type of software is intended for those who are afraid of the more advanced video editors, but still need to rotate videos from their video collections. Video recordings made with a phone sometimes end up rotated in a weird way. Software from the list down below will help you rotate wrongly rotated videos and also fix mirroring issues. 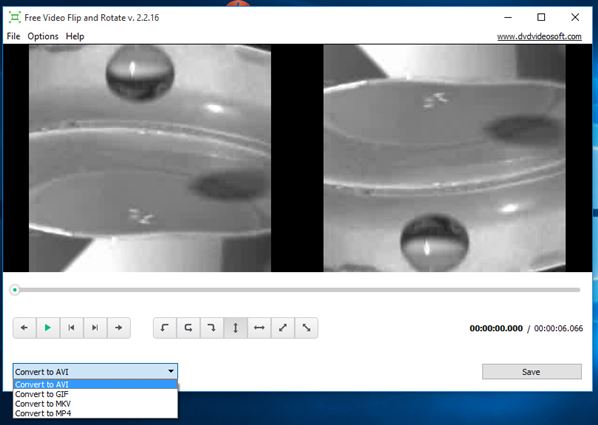 Free Video Flip and Rotate is a very simplistic video rotate software for Windows 10 which focuses solely on video rotation. After launching this application you’re going to see a window with 2 view boxes. The one on the left is for the source video, and the other one is for previews of rotated videos.

Toolbar with controls is available down below, underneath the video boxes. As you probably picked it up from its name Free Video Flip and Rotate can also flip (mirror) videos. It’s possible to setup 90° and 180° clockwise/counterclockwise rotate and also top/down, left/right video flipping. Majority video formats are supported as input, and it’s even possible to convert rotated videos into AVI, MKV, MP4 or GIF. Be careful during installation because the installer tries to install browser toolbars.

Get Free Video Flip and Rotate. 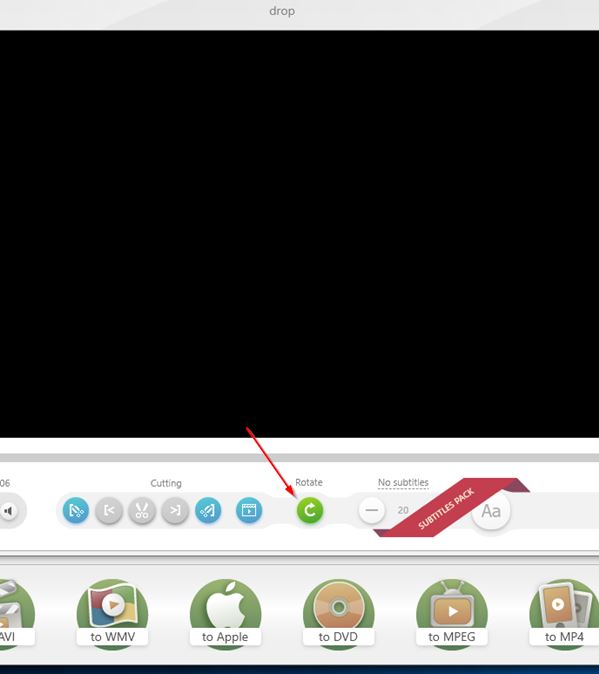 It actually supports batch video conversion, and therefore it can be setup to rotate video in batch. Each video needs to be added to the conversion queue. Next to each video in the queue you’ll see a button for opening up conversion settings. That’s where rotation for each video is configured individually, see image above. Next to rotation, Freemake Video Converter also lets you cut, join, create video slideshows out of photos, embed subtitles into videos and more. Be careful not to pickup browser toolbar during install.

Also, have a look at VPlayer: Media Player With Video Editor, Image Viewer and Converter. 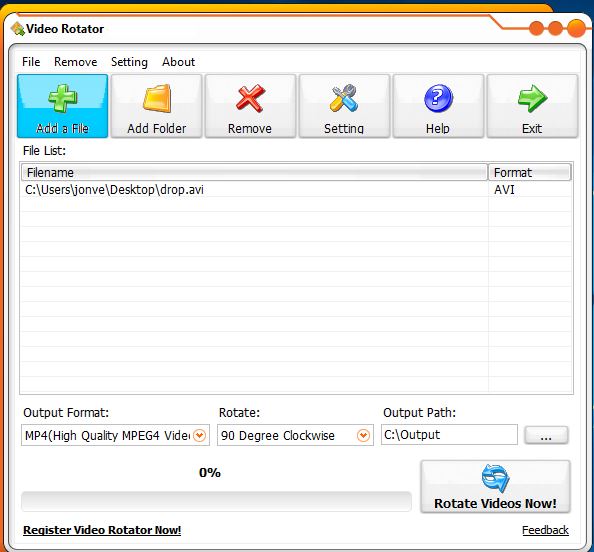 Video Rotator is another specialized video rotate software for Windows 10 which lets you perform batch video rotation. Freemake Video Converter also has batch rotate, but that’s not its intended use.

Here, in Video Rotator, you can setup a rotate setting for all the videos on the rotate queue at once. There is no need to set it up for each video individually, like it is the case with Freemake. Videos can be rotated 90° clockwise/counterclockwise and also horizontally/vertically mirrored. Conversion is also supported, with MP4, MPG, AVI, MOV and FLV being supported as output formats. Note that you need to download the Video Rotator installer from Softonic link down below. That’s the free version. The one on the developers website is a newer version, which is not free. 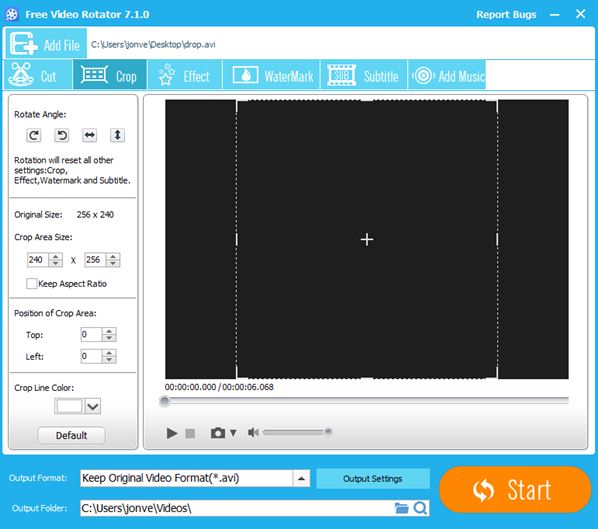 Free Video Editor is a video rotate software which lets you rotate, crop, resize, apply effects to videos, one video at a time. A preview of the rotated video can be seen inside the preview box on the right.

Free Video Editor is actually a set of multiple tools rolled into a single editor. Each functionality, video cropping, cutting, splitting and rotation is divided into a standalone application that you launch from the main interface. Video can be rotated clockwise/counterclockwise and also flipped left/right, top/down. When saving rotated video it’s possible to keep the original video format, or do a conversion with lots of formats and even device presets supported as conversion output. 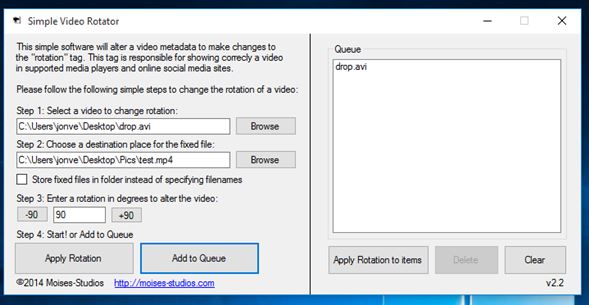 This last video rotator software is exactly what its name says that it is, a simple video rotate software for Windows 10 that lets you rotate multiple videos using queues, without a lot of advanced settings like in the previously mentioned applications.

Like you can see from the image above, it takes 4 steps to rotate videos using Simple Video Rotator. First you need to select the source video and the destination directory where rotated video is going to be saved. After that, in step 3, select by how much and in which direction you want the video rotated. With those things setup, you can start the conversion of the currently active file, setup file conversion can be added to the queue list to the right for batch conversion of multiple files at once.

Out of the 5 video rotate software for Windows 10 from the list above, the two applications that I enjoyed using the most are Simple Video Rotator and Free Video Flip and Rotate. First one I like because it supports batch rotation of videos, but it’s keeping things simple. Second one is also simplistic, but offers more options at the same time. Let me know what you think in the comments down below.