Here’s a list of 4 email tracking extensions for Chrome which can be used to keep track of when people to whom you send emails using Chrome open up and read them. Tracking how many emails out of the ones you sent were opened by the recipients allows you to calculate the effectiveness of your promotional campaigns, and also gives you the opportunity to do send a follow-up email, since you’ll know that the email was read, or at the very least opened. Let’s see what Chrome Webstore has to offer.

Yessware Email Tracking can be setup to work with Gmail and Outlook, but note that the Chrome extension only works with Gmail. For email tracking in Outlook to work, additional files need to be installed. 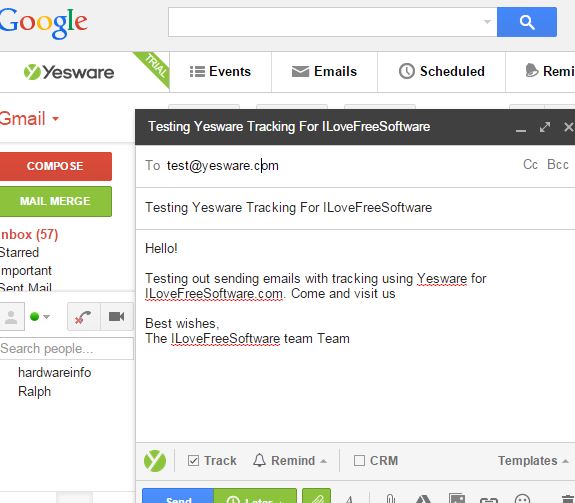 Yesware will integrate fully into Gmail, allowing you to seamlessly write and send emails like you normally would have, but notice on the screenshot above that a lot of improvements are added. The most important option for us is the “Track” check mark which needs to be put so that tracking elements are added to the email. Once you send the email and the recipient reads it, you’ll receive a desktop notification telling you about it.

Bananatag for Gmail will add a very similar set of enhancements to the Gmail interface. There’s going to be a check mark for activating email tracking next to the Send button when composing new messages. 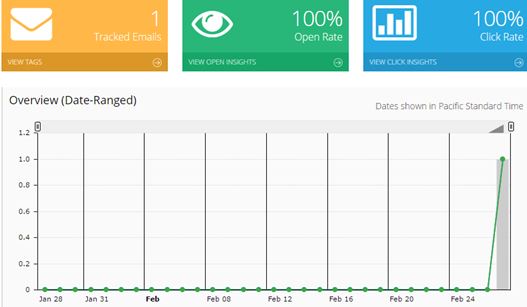 One small difference between Bananatag and Yesware is that Bananatag doesn’t have desktop notifications that let you know when emails that you’ve sent are opened. To view how many email were opened and if any clicks were made on links within the email, you’re going to have to open up the Bananatag dashboard where detailed statistics, including graphs can be seen. You can see how this looks like on the image above.

Get Bananatag for Gmail.

MailTrack is much simpler than both of the email tracking extensions that I covered up until now. It adds a single button to the email creator in Gmail. 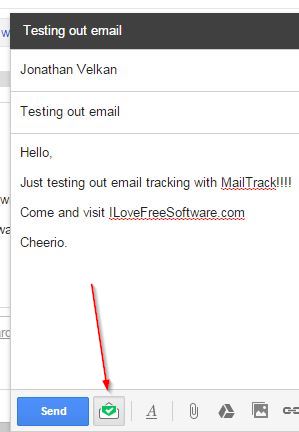 Click on this button will activate tracking and allow you to receive info on whether or not an email has been read. MailTrack account is registered as soon as you run the app. Account dashboard on MailTrack needs to be accessed to keep track of stats, but there’s also a special column added to the list of emails in Gmail itself where you will see read/not read status of sent emails. This will save you the trouble of opening account dashboard, if you’re not looking for more detailed stats that are available there.

Get MailTrack for Gmail.

mxHero for Chrome brings a large selection of features for email management, not just email tracking. 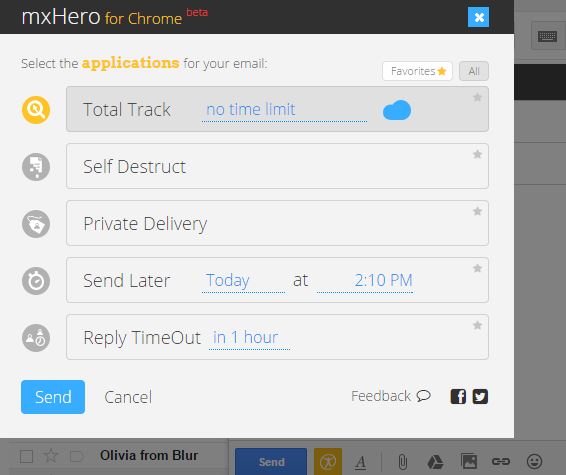 What’s available can be seen best on the image above. Next to tracking, emails can be setup with self-destruct, scheduled and sent later, recipients can have a set time frame in which reply can be sent. Upon sending your first email, you’ll need to sign-in with your Google account on the mxHero website from where you can keep track of stats. This extension is in beta for now, but everything worked OK for me.

Get mxHero for Chrome.

Also have a look at Free Email Tracking Service: WhoReadMe.

All four email tracking extensions from the list above worked great for me, and picking one is very difficult. I guess I could give Yesware a bit of a head start, but which one you’re going to choose it’s up to you. Go with MailTrack if you’re looking for something a bit more simplistic.