Here’s a list of 3 file unlocker software for Windows 10 which you can use to release files and folders which are locked up by other programs, processes and users. One of the main reasons why someone might want to do something like this is to delete a file without having to restart Windows. Other times it’s so that files can be changed and saved.

If you have problems with the “X is used by another person or program” error on your Windows 10 machine, have a look at the list down below for tools to help you out. 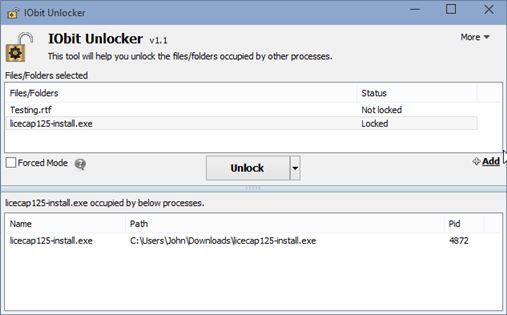 IObit Unlocker is a file unlocker software for Windows 10 which integrates into the right click context menu for quickly accessing its control panel.

Also, have a look at Solve “Cannot Delete” Problems with IObit Unlocker. 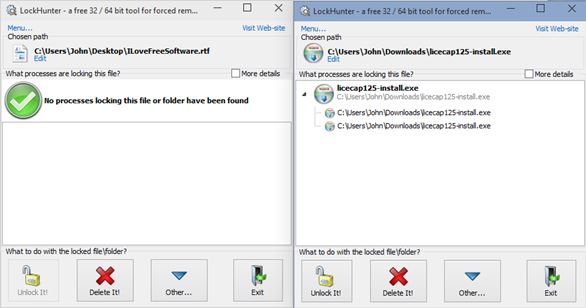 LockHunter operates similarly to how IObit Unlocker does. Option for quickly accessing its control panel is added to the right click context menu after installing the application.

Image above shows 2 types of windows that will pop-up. One on the left is for when selected files or folders aren’t locked. The one on the right is for locked files and folders. Click on the buttons down below to just unlock it, delete it, or select the “Other” option to get more options. If a file cannot be unlocked because a system process is using it, you’ll be offered to delete it during the next reboot. 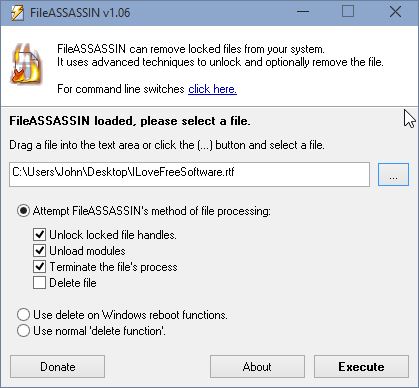 FileASSASSIN is created and published by the same team that’s behind the very popular antivirus software Malwarebytes Anti-malware.

Viruses can also report to be “locked” so they’re not easy to remove. This application was created for those who are battling infections and just locked files in general. FileASSASSIN adds options for unlocking and deleting files directly to the right click context menu. To access the actual application interface and more options that it offers (see image above), you’ll need to launch it by clicking on the desktop icon. Once the application is running, it will scan for processes that have locked up the selected file or folder and end it so that they can be manipulated.

Also, have a look at Hide files and Messages Inside Images with Our Secret.

Despite there being a lot more file unlocker software available for download out there, I only was able to get these three to actually work on Windows 10. Others spewed out errors, or they just didn’t work, including the very popular Unlocker, which was one of the first applications available for unlocking files and folders. From the 3 that did work, I’m going to suggest you to try FileASSASSIN first, and then move on to IObit Unlocker, if FileASSASSIN ends up not working or causing problems. LockHunter is also good, but the other two had a better success rate at unlocking files.