Sticky Blocks is a modern era free sliding block puzzle game for your Android. Like those old classic games of sliding the boxes through the window, this game requires you to slide a box to the highlighted square while sliding the other pieces on the board. You also have to find the gems hidden beneath the pieces. There are certain twists in the game, like there are certain sticky pieces that sticks together when brought closer to each other and create a bigger block that is difficult to move.

However, there are certain number of moves that you can take to move the block to its place. If you take the exact number of steps to move the square block into the highlighted square region, then you are awarded with a gold medal, if you take 2-3 more steps than the moves displayed then a silver medal is awarded, and any number of moves more than that gives you a bronze medal. There are total 50 such puzzles, complete each puzzle to move on to the next. 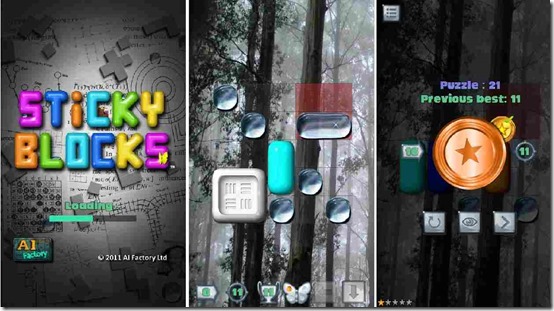 I liked the “Sticky Element” twist of this game, which explains why the game has been named as Sticky Blocks. The motive here is to move the White square box appearing on the screen to the highlighted box, while moving the other other pieces in the box. This type of box puzzle game has been with us since ages, but the “sticking elements” adds twist to the tale. Keeping in mind, that certain fluid like looking elements in the game stick to each other when brought closer, making it difficult to move across. Basically, you’ll have to flex your brain muscles before making any move. 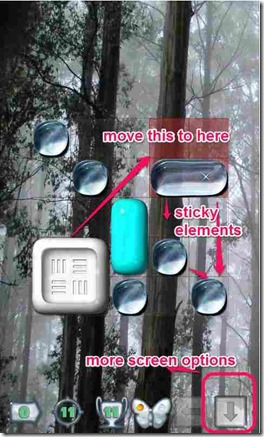 To keep it simple: move the blocks, solve the puzzle, and move on to the next puzzle. 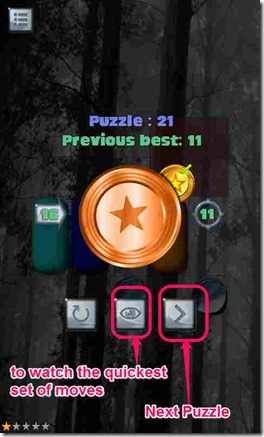 There are also some treasures hidden below the elements, like butterflies, beetles, some jewels that you keep on picking up, apart from just moving on with the levels.

You can choose your own difficulty level, from Novice, Easy, Medium, Hard, and Difficult. Trade the bonus items for bonus stages of the game. 50 puzzles at every difficulty level, and then few bonus levels give you a quite lot to handle. 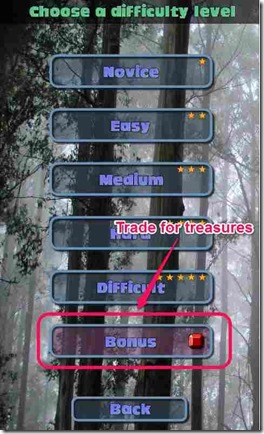 How To Play Sticky Blocks Puzzle Game For Android

Launch the game, choose the difficulty level and slide that white box to the highlighted part. Okay! That was quick, now let’s take a step by step glance. 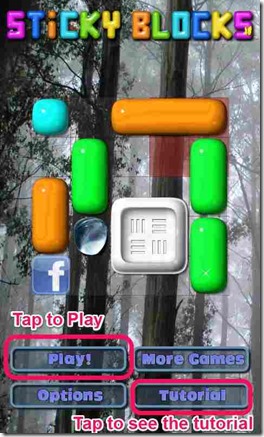 Choose a difficulty level, advisably select “Novice”. Now you will be able to see a puzzle when the game starts. Move white boxes on the screen, (sliding with your fingers) and the blocks that appear on the screen. The fluid like elements stick to each other when brought together. 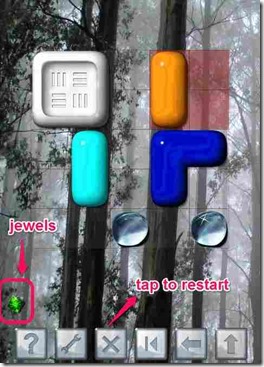 Be careful while sliding the boxes, try not to use too many moves. Complete the puzzle with as less moves as you can and move on to the next puzzle.

There are also some more hot icons that are hidden. Just tap on the “down arrow” in the game interface. This will show you the other hidden icons like the restart button etc. (see the screenshot above)

Apart from all of this the game offers you with few more options like:

Personally, if there was to complain anything about the game then I would say that the puzzles in the beginning kept repeating the pattern. Apart from this, the game is pretty addictive and flawlessly beautiful. Easy to follow interface, and full screen tablet support adds to the beauty. Therefore, I rate the game as “Good” and recommend for you to get your hands on it ASAP.

Get Your Free Sticky Blocks Here Or Scan the QR code below.