OSFMount is a free dd image mounting software that allows the user to mount disk image files. If you have an image of a disk, you can mount that using OSFMount, and then analyze that with another free software OSForensics. One interesting feature is that the user can load images of the local disks on to the RAM. In a sense, it is a way of creating RAM disks, logically a disk mounted on to the RAM.

The files that are loaded are mounted as Read Only Files so that the contents of the files will not be altered even by mistake. This is in fact a great feature, which ensures that the original disk images that are mounted are not altered. 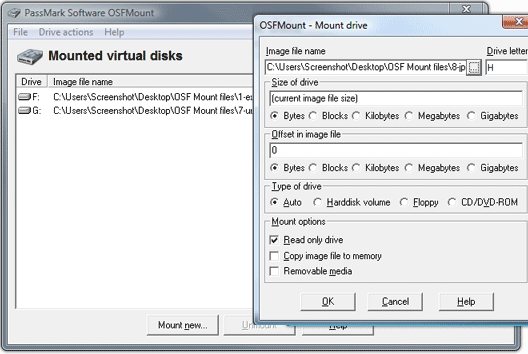 Often there are applications that require a faster data access and disk speeds. These applications’ performance comes down heavily when the disk speed requirements are not met. This free image mounting software comes to the rescue in such demanding situations.

You can also try other similar software like Gizmo Drive, Daemon Tools Lite and Virtual CloneDrive

Let’s See What OSFMount has to Offer:

OSFMount virtual CD/DVD drive software is of great help when the user needs to run application that are dependent on high speed data access. High speed data access is not possible with disk memory devices, which takes a comparatively longer time than solid state memory devices.  But when disk images are capable of being loaded onto the RAM directly, this can be achieved. Applications such as games( involving game caches), Database activity intensive applications , browsers all demand high data transfer speeds. And such applications can be easily run by using OSFMount freeware.

Further, OSFMount can be used to load CD/DVD images which are frequently used thereby reducing the time and effort involved in loading the disk every time. One other major advantage while using OSFMount  for loading images onto the RAM is, security. Since the data is stored in the RAM (volatile memory) it vanishes during system shutdowns unlike disk storage systems where the data remains persistent.

All these features make OFS mount, an interesting software to use while running high data rate applications.

OSFMount is available for free download on OSForensics official website and the size of the installer file is about 36 MB. The installation is quick and the software is simple to use. This freeware is capable of being run on Windows Operating system versions such as Vista, XP and 7. Apart from these, it can also be run on server versions of 2003,2007 and 2008. A minimum of 1 GB of RAM and 30GB of free disk space is required to run the application. The supported image format extensions include, .img, .iso, .bin, .00n, .nrg, .sdi, .aff, .afm, .afd, .vmDK among a few others.