It can also create an ISO image from an inserted disc or a folder on the hard disc.

Gizmo Drive can also create a virtual hard drive out of the system’s RAM. Its toolbar is rich in options and there is a wizard to perform complicated tasks.

Other similar software that we reviewed earlier include Daemon Tools Lite, and Virtual CloneDrive. 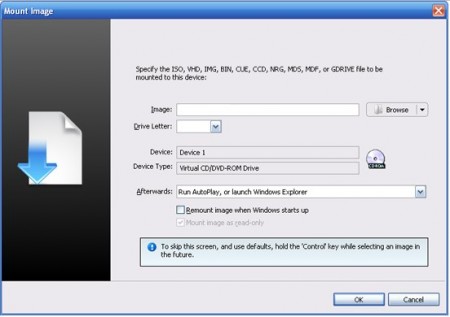 How to use Gizmo Drive:

Gizmo Drive has a simple interface that looks like a Windows Explorer. To mount an image to virtual drives, one may select “Mount ISO, BIN, VHD to virtual drive” option from the screen. This option can also be selected from Tasks command on the toolbars. As Mount Image dialog box appears, one has to go through steps. When the steps are completed, mounted image will be shown on side panel as a virtual drives. Now one can access data from this virtual drives. In addition to mounting images users can customize the toolbar. This can be done either by dragging and dropping elements in the toolbar or by using Toolbar setup.

In short the ease of use and support for all popular image archives make Gizmo Drive a comfortable alternative to mount images as virtual drives. If you want to burn ISO to a disc, you can use one of these free CD/DVD burners.