The Internet is a vast source of real-time updating information, and probably this is the reason that most of us spend quite a big chunk of our “online” time checking out our favorite blogs, news portals, and stuff like that. With that being said, it’s not really possible to discuss real-time updating information without mentioning Twitter, which is probably the best source of getting info on things, as they happen. However, this whole barrage of constantly updating information from multiple blogs, news portals, and of-course, Twitter can (and does) get a little overwhelming to keep up with.

Fret not my friends, as that’s exactly what FlowReader, a free online RSS reader that also shows Twitter feeds, is there for. Getting excited already? Move over to the flip side of the break, and find out more about FlowReader.

Note: Although the graphics shown on FlowReader’s homepage make it appear that it can help you keep up with your Facebook feed as well, that’s not the case. And the reason for that is the recent change made by Facebook to its Graph API.

How To Get Started With This Free Online RSS Reader That Also Shows Twitter Feeds?

If you’re the kind of person who’s always juggling between multiple blogs, news-portals etc., while at the same time keeping an eye on the latest on Twitter, you’ll find FlowReader absolutely indispensible. It’s a an extremely powerful, yet easy to use online RSS reader that not only lets you keep up with the latest on multiple blogs, websites, and the likes, but also makes it incredibly easy to track your Twitter account(s), all from one convenient web-based interface. What’s more, you can directly share your favorite articles on a multitude of social networks, such as Evernote, Pinterest etc., and even save them for reading later. Here’s a little step by step tutorial, illustrating how to get going with FlowReader:

Step 1: As is the case with most online services, you need to create a free account with FlowReader, in order to get started. To do so, all you have to do is go to the service’s homepage, and create an account directly using your Facebook, Twitter, or Google account credentials. Once the account has been created, you’re instantly logged in. Simply choose some of the topics of your interest from FlowReader’s suggestions, and it’ll build up the feed for you. Here’s how FlowReader’s primary UI looks like: 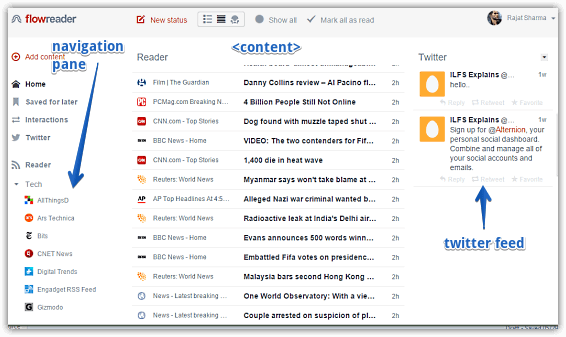 As illustrated above, FlowReader sports a pretty simple and straightforward interface. The left sub-section consists of the navigation pane, which can ne used to access primary options, such as feed items, Twitter interactions, articles saved for reading later, and then some more. The middle pane is where the added feeds appear as a list, whereas the right pane is reserved for displaying the real-time updates from the timeline(s) of the added Twitter account(s). The header bar consists of standard icon based options which can be used to mark feed items as read, change view, and things like that.

Step 2: To view an article’s snippet, simply click on it, and it’ll expand to show the text associated with it. Not only that, the expanded view also displays icons based shortcuts for advanced sharing options at the bottom, and these can be used to save the article for reading later, as well as for sharing it on a variety of social networks, such as Twitter, Evernote, and Pinterest. Check out the screenshot below: 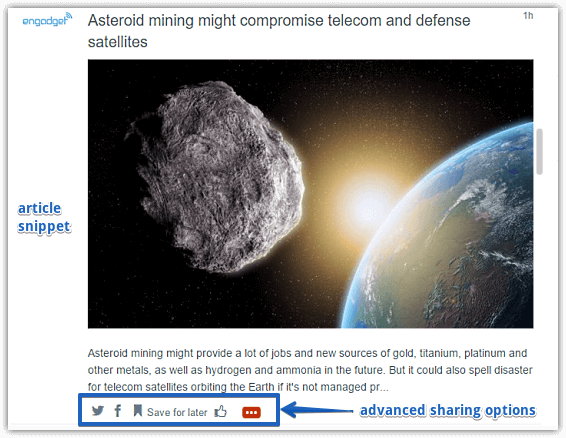 FlowReader is a pretty great web-based RSS reader that lets you efficiently manage all the information overflow from a multitude of blogs, websites, and news portals, while throwing a little bit of the Twitter goodness into the mix as well. It’s simple, easy to use, and works the way it’s supposed to. Take it for a spin, and sound off your thoughts in the comments below.