Did you know that you can actually see ISS (aka, International Space Station) from earth? Yes, ISS rotates pretty close to the earth and can actually be seen, only if you know exact time at which it is visible. Thankfully, NASA has an online application that does exactly that.

Spot the Station is a free web application from NASA that lets you find ISS sighting time from any location on earth. It tells you exact time at which you can see ISS from your city. It also gives you the direction coordinates in which you can see that. So, just head out at that time, and wave to ISS! 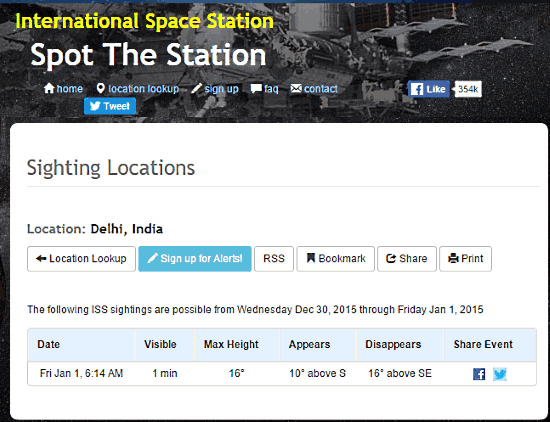 The best part of this application is that it also lets you sign up for email alerts for sightings. So, you can get email reminder for sighting in area. Pretty cool, eh?

If you are a big space fan, and like to use software like Celestia or Microsoft Worldwide Telescope to keep a track of astronomical things, then you should definitely try out this web app from NASA. Does not require any registration or sign-up; just choose the location for which you want to know the ISS sighting time, and it will show you the time.

How to Find ISS Sighting Time in your City:

NASA’s team finds Space Station viewing opportunities several times a week for thousands of locations around the world (above 6,700; to be a bit more precise). You can use that data to find ISS sighting opportunities in your city. To do that, just go to homepage of Spot The Station application of NASA (link at the end of this review). There, select your country and city. 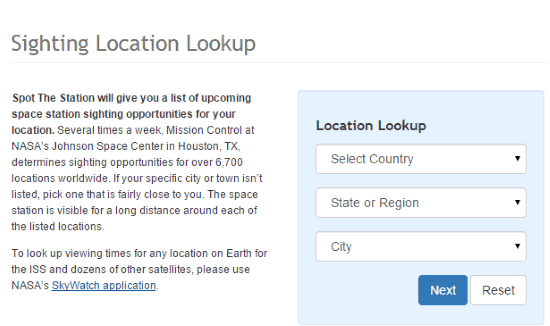 If your city is not listed, select a city nearest to you. ISS is pretty big and it can be seen from distant locations as well. After selecting your city, just click “Next”, and it will show the soonest ISS sighting opportunity in your area. It will even show for how long will the ISS be visible, and in which direction you can find it. 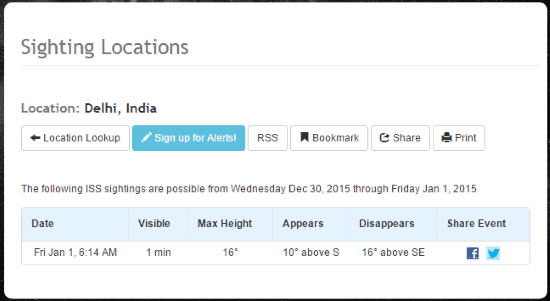 ISS appears as a big fast flying aircraft, but is thousands of miles above the earth, and flying at a very high speed. And it is the third brightest object in the sky. So, if you look in the right direction at the right time, you should be able to see it.

I am not sure if NASA app for iPad already has this feature; but if it doesn’t, it will be pretty cool to add that feature to that.

I like things that are simple yet useful, and this definitely falls in that category. Just choose your city, and get ISS sighting time in that. As simple as it gets. It would be great if it had some ISS sighting videos also from popular cities, so people know exactly what to look for. Other than that, I love it.