Here’s a list of 5 RAM disk creator software for Windows 10. A RAM disk is a simulated hard drive which uses random access memory (computer memory, where currently running programs are usually stored) for saving data. Advantage or RAM drives is that they are very fast, but they have a disadvantage in that they cannot survive power loss, because without power all data is erased from RAM. Following applications allow you to setup RAM disks on your Windows 10 powered machines. 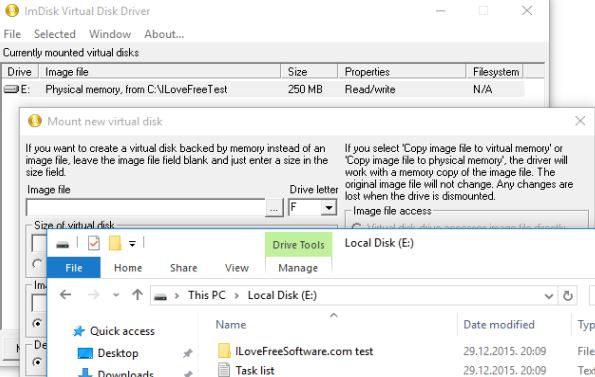 ImDisk Virtual Disk Driver is a cross platform RAM disk creator software that you can use to create both RAM disks, and virtual hard drives who’s data is saved as image files to hard drives (as opposed to memory).

This application is aimed at more advanced users, seeing how originally it was built around the use of a text based interface (command prompt). Simplistic graphical user interface can be accessed from the Control Panel (the one offered by Windows). There the size of RAM disks, mount letters and other features of the RAM disk can be controlled graphically (see image above). Upon removing RAM disks, you’ll be offered to save their data from memory as IMG files to hard drives (so they can be mounted once again as RAM drives). 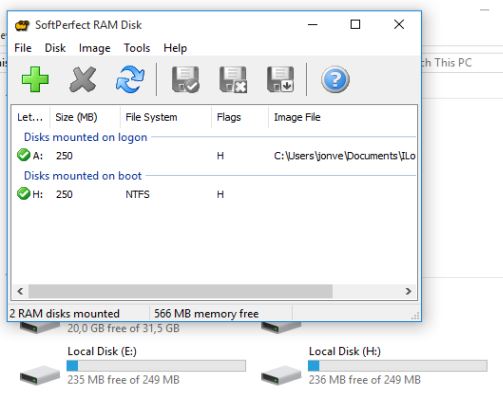 SoftPerfect RAM Disk is a RAM drive creator that’s more suited for everyday users, seeing how it has an easy to follow interface.

Another useful feature offered by SoftPerfect RAM Disk is the ability to create RAM disk drives with hard drive images as backup in case something goes wrong with the hard disk created in RAM (power loss). New hard drives are added by clicking on the green plus button from the top left corner toolbar. Setup window will ask for RAM disk size, letter, whether or not you want a hard drive image (as backup) and so on.

StarWind RAM Disk is a more simplistic RAM disk creator. It doesn’t have advanced features like hard disk backups of the created RAM disk, but it’s great for those who are only after RAM disks for their performance.

RAM disks are created by clicking on the “Add Device” button from the top toolbar menu. Once created they can be managed from the list down below. Remember that removing a RAM disk from StarWind RAM Disk will remove it for good (there’s no image saving) so don’t remove a RAM disk with important data on it. 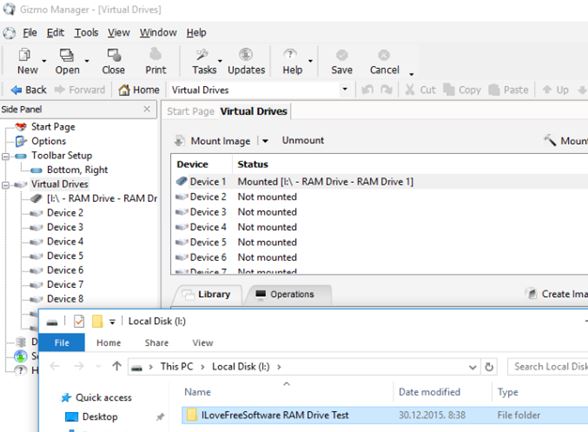 On top of being able to create RAM disks, Gizmo Central is also a tool for changing Windows themes, toolbars, setting up keyboard shortcuts, mouse gestures and more. 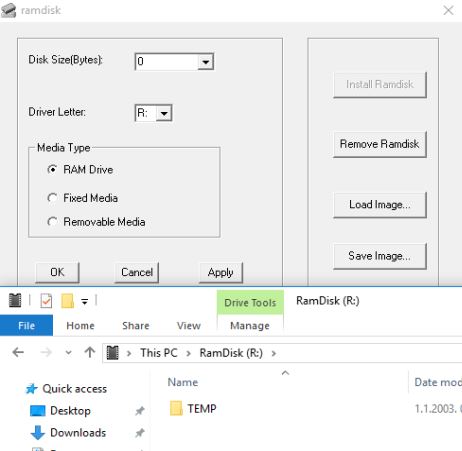 Gavotte RamDisk is another simplistic RAM disk creator which can create RAM drives, and it also lets you save currently active RAM drives into hard drive images, notice the “Save Image” option. “Load Image” option is for when you want to load previously saved RAM drives.

This is a portable application, so there is no need to install anything, but you do need to make sure that you run the application as an administrator, otherwise it won’t work properly. Setup is pretty simple. Gavotte RamDisk can create drives as RAM drives, fixed media drives and removable media (thumb drives).

From the list of RAM disk creator software above, the one that caught my interest the most are SoftPerfect RAM Disk and Gavotte RamDisk. They both offer similar features, with SoftPerfect being a bit more well made than Gavotte RamDisk. Let me know what you think in the comment section down below.